This page details prerelease information and/or media for Kirby: Nightmare in Dream Land.

The game had a rather quiet development; its earliest appearance dates back to the release of some screenshots and a trailer during E3 2002. E3 2002 took place May 22-24, about five months before the game's release in Japan, which was also without much announcement, you may also find these screenshots on the Nintendo of Japan Archive webpage.

These seem to depict the same version as the trailer does. 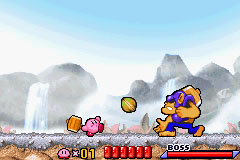 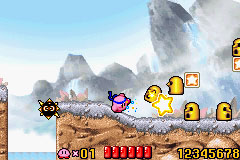 Enemies thrown by the Throw ability at this point take on the shape of stars like the ones Kirby exhales, which is how the ability behaves in Kirby's Adventure. In the final, thrown enemies stay in their normal form. 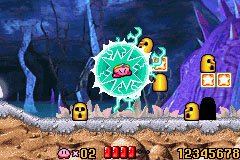 The Spark ability here has a simple headband; the final version has a more detailed headpiece. 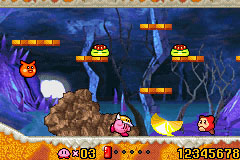 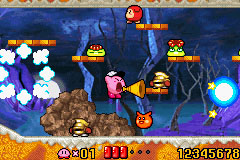 The Waddle Dees in what appears to be a level from Ice Cream Island use a different sprite with slightly larger eyes and have a dark red-orange palette compared to the bright orange one used in the final game.

Early gameplay footage from E3 2002 contains some exclusive and very different content not seen in the final game. 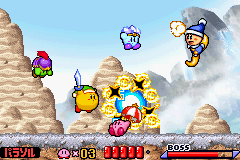 A screenshot from the Japanese minisite depicts a very different design for the Poppy Bros. Sr. midboss that uses an overall darker palette. The most notable differences are the smaller and simpler eyes, a slightly smaller hat, and a black outline on the collar (the final game uses a gray outline instead).