This page details one or more prototype versions of Kirby Battle Royale.

In order to promote the game, HAL Laboratory Inc. and Nintendo released a Demo of Kirby Battle Royale in a physical cartridge and as a downloadable program in the Nintendo eShop. This article documents the North American Demo, which was released on January 4th, 2018, 15 days before the final game's North American release.

The Demo's title screen sports a huge "DEMO" graphic at the bottom of the logo. That's pretty much it.

The Training, Online, and Options icons are grayed out, as these modes are not available in the Demo at all. Tapping on their icons brings the player to a screen with the message "Available only in the full version of the game". Additionally, three extra buttons exist in the Demo; The one that has a money bag icon is used to transfer Battle Coins to the full version of the game, while the button that displays a Meta Knight icon is used to transfer Meta Knight to the full game. The Nintendo eShop button fittingly directs the player to the Nintendo eShop.

While inaccessible in the Demo, the medal menu's text can still be found inside the game's files. Some of the requirements and unlock text were slightly modified for the final 1.0.0 release for all supported American languages. The text, however, got reverted in the 2.1.0 Update to its Demo iterations. 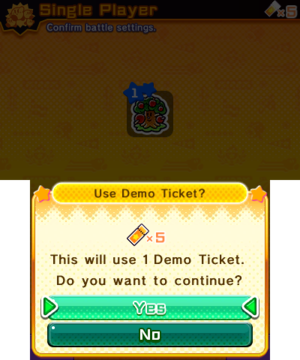