Kirby & the Amazing Mirror is Kirby's second and final GBA adventure, taking on a Metroidvania type of gameplay similar to Kirby Super Star‍ '​s "Great Cave Offensive" mode and featuring three Kirby partners who aren't very helpful. Oh, did we mention Kirby has to save Meta Knight this time around? Aw YEAH!

The enemy indexes 40 to 44 include unused data for two unused Bosses and two unused Mid-Bosses. They all use Golem's sprites as placeholders.

Any Chip enemy must be set to do something in-game. If one manages to add a Chip to a room but doesn't modify its behavior, it will default to just hopping in place.

Despite being indestructible, the Gordo enemy has a set HP value of 2. Nothing can reduce its HP.

The Soarar enemy has an unused idle animation which only consists of one still frame. Since Soarars are always in constant movement, this goes unused. Please note that the sideways movement is not part of it. 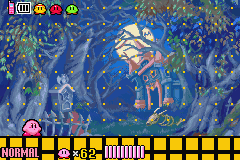 This room uses a similar tileset to Kirby: Nightmare in Dream Land's debug rooms. This was probably used as a debug room earlier in development, but it's empty now. Use code 02020FE6:03C9 and you'll be transported there after you lose a life. 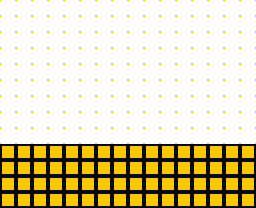 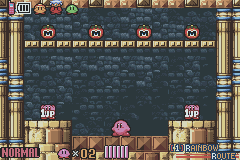 The header data for this room is completely missing from the final game, but all the other data (tile map, solidity map and objects) is still there.

The only tileset that fits is the one used in Radish Ruins. The room contains four Maxim Tomatoes and two 1UPs.

While not fully unused, the palette used for the windows outside the main building of Peppermint Palace has some unused shades of green and blue.

The game can apply this palette to the pine trees outside the building, however. It gives the trees the same colors from their used palette, but with a black shadow and a purple trunk.

Objects 9A and F0

Two objects with the IDs 9A and F0 lie unused within the last batch of objects from the game's object list. When spawned, they immediately trigger a game reset.

The 2003 Demo used a similar effect as a security mechanism. If the player attempts to load any enemy/object they aren't supposed to see, the game resets when it spawns it.

Object ID 8E hosts the cut-scenes that play when encountering and defeating Dark Mind inside the Dimension Mirror. It also hosts two early versions of the aforementioned cut-scenes.

The first cut-scene plays similarly to the final version, but Kirby displays an unused question mark graphic above his head when he encounters Dark Meta Knight.

The second cutscene is a quite different from the final version. This also uses the unused question mark graphic, but the Kirbys are now visibly shocked when Dark Meta Knight shatters and when the portal to Dark Mind opens. They also use another unused graphic when shocked.

Various spots can be found in the ROM that could host objects, but are dummied out or have partially removed data. Below is a long list with every object of this kind with its effects and ID.

For some reason, lots of regular doors hide behind other mirror doors in Rainbow Route, Carrot Castle, and Radish Ruins, with the latter area having the most doors. They can be seen by disabling the 5th graphic layer. It's unknown why they're there, but it's possible that these were used as placeholders during development, and the team simply forgot to remove them.
The obscured doors may vary in appearance depending on the area they're located. In Rainbow Route, the door is black with a pointy arch, while in Carrot Castle, the door is gray and it has a regular arch. The ones in Radish ruins are the same as the ones in Carrot Castle, but colored Cyan.

Strings relating to the development process.

This whole patch of devtext can be located at 00369A64 in the Japanese version, 0038F29C in the European version, and 003852F0 in the US version. The text appears to be related to a deleted debug menu of sorts. The prototype also has this text and more. 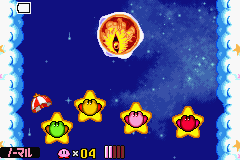 When Kirby is transported to Dark Mind's last phase, any ability that he had on him will be removed immediately. Thanks to glitches, however, it's possible to keep the abilities of the other Kirbys. To do so, Kirby must call his friends when the screen is almost fully red after defeating Dark Mind's core. This will result in the Kirbys being able to move around the cutscene where Dark Mind escapes, and conserve the ability when the final fight begins. There's a side effect to all of this, as the ability hats (or parasol, in the case of Parasol Kirby) of the Kirbys will just stay floating beside the Warp Star. However, there is one ability who has a unique effect: Missile. 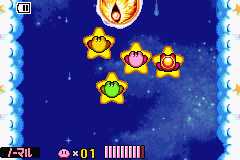 Missile is the only ability that has a unique sprite when riding the Warp Star. It's identical to one of his sprites when climbing a ladder, but it's located at a different spot in the ROM. While the ladder sprite is located at 005B5D18, this one is located at 005B9458. Missile, unlike other abilities, doesn't have separate sprites for his hat.

Other abilities who have their hats and base sprites as one, such as Cupid, Hammer, Fighter, and Throw, will crash the game if this glitch is attempted with them. This most likely means that the game is trying to load graphics that no longer exist for these abilities. As for abilities that have their hats separate, they could be loading their default hat sprite due to the game being unsuccessful at finding the correct graphic.

All of this indicates that, at one point, every ability was planned to have a special graphic/hat for the Warp Star ride at the final fight, but for unknown circumstances, they were cut.

An EXTREMELY rare Glitch can occur at the last Dark Mind fight that causes a softlock. It can happen randomly, and there are no clear requirements for it.

During the post-credits scene, Dark Mind has an absurdly low chance of simply not dying. The player can keep hitting him, but he will never explode. This unfortunate event can at least let us see some unused behavior from the hit counter. If the player is patient enough to surpass 999 hits to Dark Mind's core... ...the counter just resets to 000 hits. Cool.