Most enemies and characters have all of their animations (including unused ones) returning from Kirby: Triple Deluxe. Only new unused animations will be documented, with a few notable exceptions being made.

Dyna Blade has a test animation titled "TopL" that consists of her hovering slowly in a default stance. The result is very... frightening.

Some abilities still have animations for moves that appeared in Kirby: Triple Deluxe, but were cut in this game. Please not that, like with the previous game's article, our good friend Waddle Dee from Kirby Battle Royale will be here to show you the unused animations instead due to strange visibility issues with Kirby's model.

Despite having all of its Mint code removed, Bell still has animations for the moves "Floating Ring-ding" and "Underwater Twin Ring-ding".

Like with Bell, Hammer has an animation for the move "Underwater Wheel". All the Mint related to it was removed as well.

Lastly, Sword has an animation for "Underwater Spin". Its situation is no different to that of Bell and Hammer's.

The background of Bubbly Clouds in the original Kirby Fighters was completely different. It actually borrowed assets from Kirby Super Star Ultra. In this game, the whole background has been completely overhauled. However, the textures for the original background still reside within the model file for the stage, located in RomFS/gfx/STD/Fight/Decoration/BubblyClouds/BG.bch.cmp. 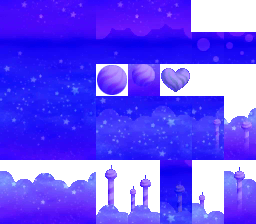 There are some parts of the texture that are used, but they have been removed here for the sake of clarity.

Found in RomFS/mint/Fight.bin.cmp, two Mint debug scripts are mentioned under Scn.Fight.Debug, called "DamageMonitor" and "GeneralDrawer", but they're completely empty. Aditionally, one more empty script is mentioned in Scn.Fight, called "DebugFightSettingProxy".

The constants for Spear eventually got used in the game's sequel thanks to Bandana Waddle Dee's inclusion as a playable character.

Various stages have some extra geometry with astonishing amounts of detail that the player isn't normally able to see. 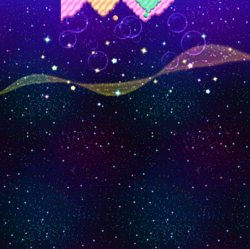 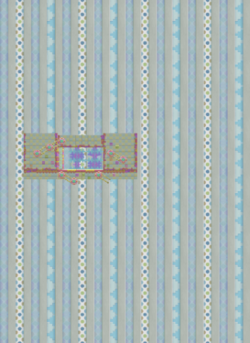 The Fountain of Dreams's skybox has a strange darkish cyan texture at the bottom. Additionally, the grassy terrain stretches very far horizontally.

The secret Fountain of Dreams has much more sky than the player can see.

Like in the original Kirby Fighters, the Sweet Potato model from the Japanese version of the game was changed to a Mint Leaf in International releases of the game. The same thing happens in Kirby Fighters 2.

All of the stages had their names changed for other languages.

While Kirby Fighters Deluxe doesn't have much text, the American English and European English version have various differences within their messages. Many of them are very slight changes, such as changing the formatting, changing the hyphens, replacing every instance of "Color" with "Colour", or correcting various gramatical quirks. As such, not-so-obvious changes will be highlighted.

When the game tries to re-create save data, the text that is displayed is slightly different between regions.

Two buttons in the options menu were changed in the European version to display different text.

The text that displays when pressing the eShop button in the options menu was revised for the European release.

Deletion of Save Data

A single message that pops up when the player attempts to delete their save data differs between versions.

The explanation message for the CPU adjustment screen was changed in the European version.

The message that shows up when the player tries to enter multiplayer mode but the wireless communication isn't active is different.

Some loading screen tips were changed in the European version of the game.

When unlocking Shadow Kirby, one of the messages that shows up differs slightly between regions.

The game's Internal Name is "Pizza", according to the sound archive and a file called ExHeader.bin.