Puyo Puyo 4. Carrying on in the tradition of a dumb pun in the name instead of the series entry number.

If you put the Dreamcast game disc into your PC, in addition to a few unassuming text files found on most Dreamcast games, you can also find:

This "omake" or bonus picture, "OMAKE.BMP", which has been converted here to PNG: 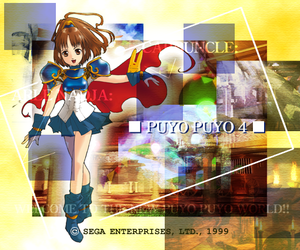 If you play the CD audio track, converted here to OGG, in something other than a Dreamcast:

There are sprites for Ragnus the brave, minotauros, Honey Bee, Momomo, And Incubus shown in the compile art gallery 2/2+ discs with Ragnus having a sprite sheet.