It's the fast-paced competitive slime-matching game Puyo Puyo Tsu, and this time, it's been ported from the Game Boy version to an obscure handheld and localized. It is not to be confused with the English version of Minna de Puyo Puyo, which is also called Puyo Pop. 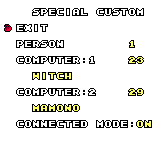 At the main menu, highlight Option and press A+B to add a Special Custom menu to the Custom menu. The options are similar to the Game Boy counterpart, but the Rule Lock option is removed and PERSON (Number of human controlled players) cannot be set to 2 (which controlled both players at the same time).