This isn't Puyo Puyo, this is Super Puyo Puyo! What makes it so Super, you may ask? Well, it being on the Super Famicom and... not much else, actually (especially compared to the SFC port(s) of its sequel). This game would later be given a new code of pink paint and released in the west as Kirby's Avalanche, just like what happened to the Genesis port with its significantly less pink code of paint.

Hold A + B + X + Y on controller 2 when turning on the game to expand the options menu and unlock an additional Zusin option and "Special Custom" menu. 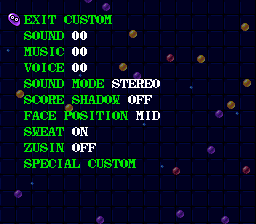 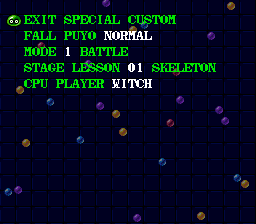 Using the Pro Action Replay (PAR) code 80FFF002 will unlock the above and add even more options to the Special Custom menu. Interestingly, two of these options activate gameplay features that would be introduced in the sequel Puyo Puyo Tsuu, released the following year! 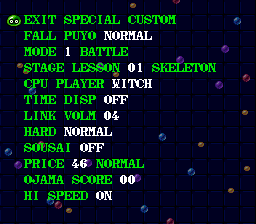 All of these options are avaliable in Kirby's Avalanche as well.