Chop out most of the voice samples from the arcade version and add a second rotation button to get the Genesis Puyo Puyo. Hooray for nearly-compatible hardware!

"Insert Coin(s)" text in the sprite set for the title screen. Makes sense, given how easy this was to port.

Located at 0003FF60 in the ROM lies duplicate sprite data for Harpy that goes unused. The copy used in-game is located at 000634A8. Interestingly enough, in Dr. Robotnik's Mean Bean Machine, the unused duplicate copy got cut while the one that was used in-game got left in (located at 00077076 in there). 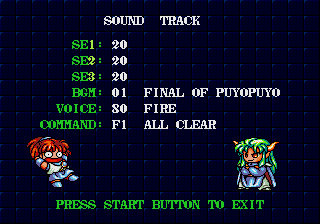 A sound test can be accessed from the Options screen in one of two ways:

Not much is here; you can play up to three sound effects, although these are not on separate sound channels so they will stop other sound effects playing plus a song and one of the game's three voice samples.

The commands do the following:

Music 0E (Warning of Puyo Puyo) is programmed to play the tune a semitone higher after each pattern, it will play so high that only the drums are left before it loops around and plays out of key.

Interestingly, the Mega Drive version has one song that is both not in the arcade version and is unused in the port called Rejection of Puyopuyo. This song, like many of the others in the game, comes from Madou Monogatari 1-2-3 (specifically 3, in the intro when Arle runs away from Minotauros). 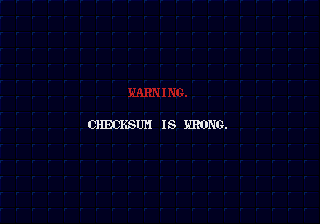 This simple warning screen is displayed for a few seconds at boot if the game's ROM checksum fails, and may be a holdover from the arcade version (most arcade games feature similar ROM/RAM checks to aid operators in troubleshooting).

00FF1878: If set to a nonzero value, stages get skipped in Scenario Mode.

00FF1879: Does nothing, but is initialized alongside the other flags.