Tetris Worlds is the game that, for better or worse, codified and standardized many of the Tetris series' iconic elements. Also, T-spinning.

(Source of everything in this page: Rich Nagel (Tetris Worlds for PC Anomalies and Hacks from tetrisconcept.net))

All of the game's mechanics are stored within "TWS" (Tetris Worlds Script) files. These files can be found in the "Tetris Worlds/ASSETS/ANY_PLAT/ANY_LANG/SCRIPTS" subdirectory, and are as follows (script files in bold are unused):

"Endurance Tetris" can be played by editing the game's configuration file and enabling the "ENDURANCE" option (see here) or replacing the existing game mode's script file.

This is a strange game mode that is difficult to describe. Every non-I piece will break and fall individually when they are placed in the field. All I pieces (the cyan blocks) will not break, and will stick together with other cyan blocks. The line clear is disabled.

If the blocks stack high, the game will erase some of them automatically. This feature also prevents the players from topping out.

"Ribbon Tetris" can only be played by replacing the existing game mode's script file. Except for orange, the blocks can only be cleared by connecting the same colored blocks from the leftmost to rightmost portion of the playfield, although they don't have to be a straight line.

There are a few orange and other blocks from the start. The orange blocks can only be cleared by connecting them all. In order to advance to the next level, the player must connect all orange blocks by clearing non-orange blocks.

A sample Tetris Worlds script file. This mode crashes if loaded by the game, as it is a sample script file that is not meant to be played. The file is full of developer's comments.

Only the blue I pieces will appear, and the level will increase every time you put them to the playfield.

A few debug features can be activated by setting the "DEBUGKEYS" option to "TRUE" in the config file (Tetris Worlds/ASSETS/PC/ANY_LANG/MISC/TWConfig.INI).

Debug mode enables several hidden features, which can be activated by using F6, F7, F8, F9, F10, and F11. Some of them are manipulated by the Insert, Delete, Home, End, Page Up, and Page Down keys.

These features work on both the menu and in-game, but using them in both places in a single session will often crash the game. 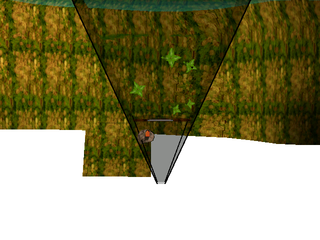 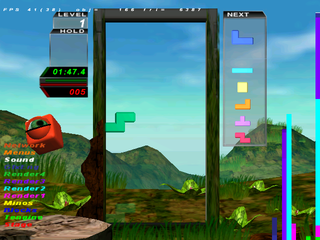 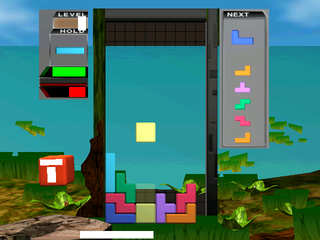 Besides debug mode ("DEBUGKEYS"), there are several hidden settings in the config file (Tetris Worlds/ASSETS/PC/ANY_LANG/MISC/TWConfig.INI) that do not get added or modified by the game's configuration tool (TWConfig.exe).

Appears to be non-functional. The default is TRUE, but even if set to FALSE, the opening cutscenes will still play.

Enables software renderer. Not sure if this gets enabled by TWConfig.exe with very old hardware, but it causes several graphical glitches if enabled.

Forces the game to use the BMP format images in the "Tetris Worlds/ASSETS/PC/ANY_LANG/MISC" subdirectory as flat block textures. It also disables ghost piece display.

Crashes the game in "Story" mode, but removes the HUD display shown above the playfield (current level, next pieces, time, etc...) in "Arcade" mode.

The [GAME] heading does not exist in TWConfig.INI by default. The only time that the "[GAME]" heading is added is when you reach rank "15" for all (?) of the "Story" mode games. At that time, the game also adds "ORIGINALTETRIS=TRUE" to the "TWConfig.INI" file, which unlocks the "Original" Tetris game ("Hadar" world in "Story" mode).

The hidden settings in the [GAME] heading are not automatically added by the game or its configurations tool, so you'll need to add the entries manually.

Sets the delay of the DAS in tenths of a second. For example, edit the line to read "FIRSTREPEATDELAY=4" to change the DAS delay to .4 seconds before the game begins to autoshift the Tetrominoes.

Its function is unknown. It's listed in the "TetrisWorlds.exe" executable, but the game behaves the same no matter what value is applied to this setting.

Forces the game to load "ENDURE.TWS" (a strange game mode) regardless of the selected game.

Forces the game to load "TEST.TWS" (I piece only, every piece increases level) regardless of the selected game. Likely used by the developers for testing.

Supposed to force the game to load "RIBBON.TWS", but it doesn't seem to be functional.

A mysterious text. Seems to be a PS2 memory card string.

Appears several times in the .exe. NetImmerse (now known as Gamebryo) was a game engine used by several companies, including BPS. The PC version of Tetris Worlds (and possibly the PS2 one as well) was created using this engine, so most of the image files are stored in the .NIF format.

Some bizarre text you can find at /Tetris Worlds/ASSESTS/ANY_PLAT/ANY_LANG/ANISCR/_NULL.INI. It seems to be for an animation in which nothing happens.