Super Bombliss is one of those many, many Tetris variants. 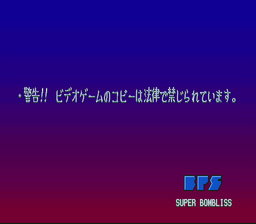 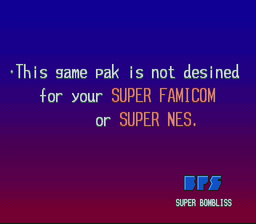 On startup, the game tries to detect if it's running on pirate hardware in two different ways: by checking if there's more SRAM available than there should be, and also by checking if the game itself is running from RAM instead of ROM. If either of these conditions occur, an anti-piracy screen appears after the usual copyright notice.

Similarly, if the game detects that it's running on a PAL console, a typical region error screen shows up instead (with "designed" misspelled to boot). 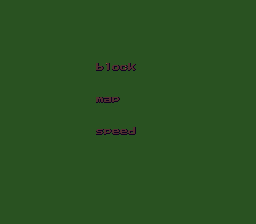 Remnants of a debug mode exist, and can be accessed by starting the game with Pro Action Replay (PAR) code 80809004 active.

The menu is rather simple, and consists of three options: "block", "map", and "speed". There is no apparent way to exit the debug menu.

The debug menu seems to have been abandoned at some point in development, as the menu (and the screens for each of the three options) no longer load the correct graphics. 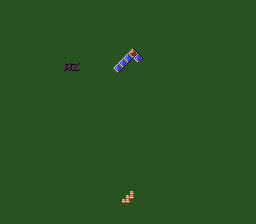 Displays all of the different block graphics in the game. Pressing B and A cycles through all the block formations and their rotations (including the 45-degree in-betweens). Pressing X changes where the bomb is placed on the block.

The two characters to the left are a hex number representing the frame being viewed, but the letters Q-Z appear in place of the digits 0-9 for some reason. For some values, a smaller, yellow block also appears at the bottom of the screen (probably the icons used to display the next piece). Pressing B and A also cycles through these, but it goes straight to the next block instead of showing each rotation.

There is seemingly no way to exit this screen. 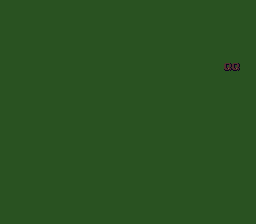 May be a map/puzzle viewer, but nothing is visible except for another hexadecimal number. Pressing buttons still increments/decrements the number, but nothing seems to appear for any of them. Increasing/decreasing the number seems to affect the tiles which are placed on-screen, but without proper graphics this has no useful effect as most of the screen is always blank.

As with the "block" screen, there is no way to exit this screen. 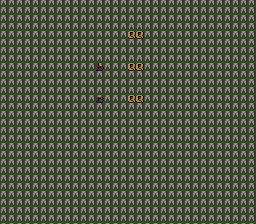 Has three numbers labeled "A", "B", and "C", which all start at 00. The background is also corrupted as a result of appropriate graphics not being loaded.

Each number controls something related to the game's speed. The number labeled "C" controls the speed at which blocks can be moved horizontally, but the effects of the other two numbers are currently unknown. Pressing Start + Select starts a new game with the chosen speed settings.