This page details one or more prototype versions of Tetris (DOS, AcademySoft).

This prototype of Gerasimov's Tetris is contained within the Tetris Gold compilation CD-ROM disc, released in 1993.

For some reason, there is a feature in which if you press Numpad 6 during gameplay, your points will be subtracted, or if you have none, your score will be negative. 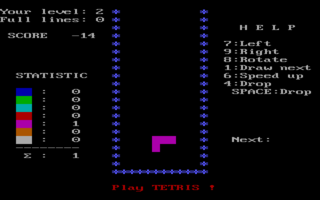