Following the 1993 US-only monochrome version, a special version was released internationally in 1994 offering Super Game Boy support for palettes and borders which can be accessed by pressing A while paused. TOSE was also tinkering with the idea to use Super Game Boy sound effects.

To jump to the debug menu after the next screen change, lock DF44 to 24 (GameShark code 012444DF). Disable after entry to the mode unless you want to loop back to it every time. Alternatively, use Game Genie code 241-58F-E6E to start at the Debug Menu screen. Pressing B activates the CPU meter.

Much like StarTropics, this game has a CPU usage meter. The screen will dim to indicate free CPU remaining.

To enable, set RAM address DF45 to anything but 00.

In the original Game Boy release, Debug Start 0D would take you to a cutscene. In the Super Game Boy rerelease, 0D does nothing and no longer references to anything. This may have been used to test the unused Super Game Boy borders.

TOSE was testing for potential sounds that could have been used in-game. The enhanced version of Tetris 2 was in development alongside the Super Game Boy, so it is also possible that this SOUND listing was used for additional purposes.

More evidence suggests that Super Game Boy sound effects were planned: located at 0x0EF8 is a single SOUND 4100000000 command which is completely unused and was intended to play a sound at startup. Game Genie codes F8F-59F-C48 ??E-F9F-E6A ??E-FAF-E6A ??E-FBF-E6A ??E-FCF-E6A will allow you to play any Super Game Boy sound and/or BGM setting upon startup.

Additionally, there is a second SOUND command 4180800C located at 0x0F08 that is used for muting and fading out the sounds in the debug menu when pressing B. The Super Game Boy SOUND volume/pitch setting table starts at 0x01C1F6. 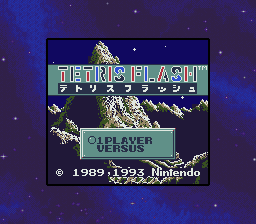 CHR for the clown picture was overwritten with the space border that is loaded during the initial CHR_TRN character tile transfers at startup, however the final border was never implemented. This is either a programming oversight or there was indecisiveness over using a specific border when they ultimately decided to make the borders hidden, and only accessible by pausing the game and pressing A.

A single MASK_EN command which would freeze the screen with a black palette is listed but is never loaded. The PAL_TRN command is issued immediately after, so the effects are negated. This is also supposed to load with the initial border. Game Genie code 98F-59F-C48 will restore this setting. 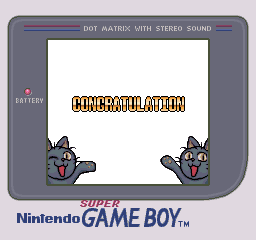 Game Genie codes 14F-74F-E6E 18F-73F-6EE will load a border and a congratulatory message upon startup that is not used otherwise in-game. The border is similar, but not identical to the default Super Game Boy border.

The Japanese title screen has different graphics, added animations (flickering stars and a light flash in the logo), and changed the Super Game Boy palette. Its options were also moved up a line.