Yoshi's Cookie is a puzzle game in which you match rows and columns of cookies in different shapes. 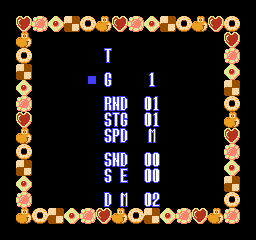 Game Genie code GEUGXXGK (Japan) or GEUKNXGK (US) re-enables the debug cheat code, which allows you to access a debug menu by pressing A + B + Down + Right at the title screen.

The debug menu allows you to select any game mode/round/stage/speed, listen to the sound effects, or view all mini-cutscenes and both staff sequences. To return to the title menu, select the "T" option. Press Up and Down to select an option, A and B to change option parameters, and Start to activate an option. A similar debug menu is also present in the Game Boy version.

Normally, the "SND" option doesn't work due to a bug which just crashes the game. This can be fixed with Game Genie codes AAXLSPAZ OAXLVPAA XTXLNPOE (Japan) or AEUUAIAZ OEUUPIAA XVUUZIOE (US).

A partial graphic of a saddened Mario. It is likely an early version of the sprite(s) that appear when Yoshi eats the cookies on the title screen, but it does not line up with any of the used tiles.

Three songs are present in the Sound Test, but never used in-game.

These songs are also present (and still unused) in the Game Boy version.