Mario is Missing! is a poor attempt at teaching kids geography. Even putting Mario characters into this game doesn't make it any better.

Still, it's notable for being the first starring role for Luigi, and for being one of the few multiplatform Nintendo-related games to include a PC version (in this case DOS). 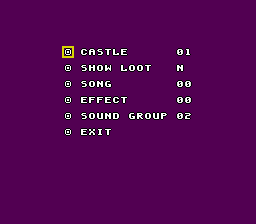 When the title screen has completed loading (Search for Mario and Continue Search is displayed), press L + R + Select + Start on Controller 2. A menu will appear that comes with a sound test, a starting castle modifier, and an option that says "Show Loot". This only works on the English version of the game.

Setting "Show Loot" to Y allows the player to see if a Koopa has an artifact. By pressing R or Select to view the map, blinking Koopas will appear to show that they do have an artifact.

Setting "Castle" to 2 or 3 will make Luigi start on the second or third floor, respectively.