This page details one or more prototype versions of Mario Artist Paint Studio.

A prototype of Mario Artist Paint Studio was found and recovered from a 64DD development disk. It is dated February 11, 1999, almost nine months before the final build.

The prototype version has a much different title screen. It also lacks the "PUSH START" text, and others.

Inside Banjo & more Stickers, there are renders of the 3D World's Planet Mars creatures. While they use their final names in-game, the internal name is different. Oddly, they use their final English names internally in 3D Movie mode. They can be found at offset 0x1E87D4. 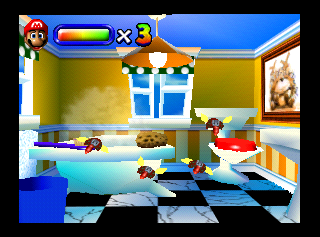 Of particular note is that this build contains the "Gnat Attack" minigame seen in some magazine previews. It can be accessed by selecting the Coffee icon in the 2D Paint mode.

A medal is awarded when you finish a full loop of all four stages. After finishing five loops, the mini-game goes back to its first-loop difficulty and will crash when awarding a 6th medal.

Oddly, while the game does have five different medal graphics, only the first one is used.