Mario Super Sluggers is the sequel to Mario Superstar Baseball. Adding new playable characters, stadiums, error items, and even a brand new Challenge Mode! This is also one of the few Mario games to not be released in Europe. 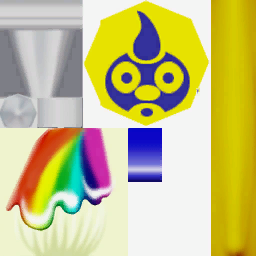 The texture for Bowser Jr's paintbrush has unused graphics for the E. Gadd logo, the two spikes on the sides, and the blue ring around the logo. This is a leftover from the original paintbrush texture used in games such as Super Mario Sunshine, and Mario Power Tennis.

The texture for King K. Rool's scepter has an unused graphic for a green diamond. This suggests that at one point in development, the blue diamond on top of the scepter was originally going to be green.

An unused song labled "bgm_captain". This song would've played during an event involving the team captain.

A handful of the team names were changed.