For the first time in the company's history, Nintendo released a second 3D Mario game on the same console. Once again, Mario gets sent back into space to save the Princess and collect the Power Stars. The game mostly revolves around unused ideas from the first game and features a simpler story. As the game is directly built off of Super Mario Galaxy, there are a lot of unused leftovers from that game. Nevertheless, the game consists of many new unused assets.

The internal project name for the game is, amusingly, Super Mario Galaxy More. 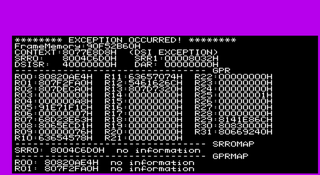 The exception handler is still included in the game's code, but it's usually disabled and does not appear without code modifications. It can be reenabled by using the following Riivolution memory patches for the American, European and Japanese versions of the game:

Since Galaxy 2 was built directly off of the previous game, it only makes sense that there would be content leftover that the developers either planned to use, forgot to remove, or simply didn't bother to remove. This includes several enemies, items, graphics, functions, power-ups, stage pieces and object features. As there is way too much to list here, all leftovers are detailed on the corresponding subpages. For unknown reasons, the Ice and Flying power-ups from the first Super Mario Galaxy have been cut from the game. Even though their files and collectable items have been removed, they will work if their files are added back in. Both power-ups also come with new, remixed music themes.

The names of empty folders of deleted zones as well as unused texts, indicate that in the intro galaxy you could originally go into Peach's castle and Bowser stole only the power stars for the time being and not Princess Peach.

The topmost section of Upside-Dizzy Galaxy's first room is called SwitchGravityBombHeiPlanet. Bob-omb (BombHei) is not used anywhere in the level.

According to its name, ChaosBossBussunZone, the boss section from Flipsville Galaxy was originally meant to appear in Upside Dizzy Galaxy.

The zone containing the second planet of Supermassive Galaxy is called SmallBigMetboZone, indicating that it was meant to have Goombeetles (Metbo) instead of three giant Koopa Troopas. Giant Goombeetles do not exist anywhere in the game's files.

Cloudy Court Galaxy's level select banner lacks a few aesthetic features, such as the green vines growing up the planets, and the little yellow flowers on the trees. In addition, the grassy hedge wall curling around the wooden platform is taller in the level select banner.

The level select banner for Chompworks Galaxy depicts the Wanwan Escape Planet with a beige-colored frame, as opposed to the blue frame seen in-game. In addition, there seems to be an object resembling a Comet Medal floating above the Chain Chomp 'bazooka'.

As with the previous game, the Japanese version's title screen has the game's title in Japanese under the logo. The Taiwanese version follows suit, but in Chinese. And again, the Korean logo was changed completely to accommodate the game's different title.

Like the previous game, As a result of the Korean release's title changing into Super Mario Wii 2, the audio for when you select the game on the Wii Menu was edited; however, instead of editing the new voice clip of Mario shouting "Super Mario Galaxy!", it reuses the one from the first game, but retains the "WAHOO!" unique to the second game's screen.