Super Mario Odyssey is an open-world 3D Mario platformer in the style of Super Mario 64 and Super Mario Sunshine, only this time the player can use Mario's newfound friend, Cappy, to cap-ture just about everything across the many Kingdoms.

Also notable is that Mario can purchase many different hat and clothing styles, some of which will unlock certain locked doors. Many of these outfits had been donned by Mario in prior games and media, some of which are rather obscure.

Originally, the tracing game in the Moon Kingdom was going to be in the shape of a star, but in the final it was a circle.

Inside various BYAML files in WorldList.szs are references to removed test stages.

In the message project file in the final update, there are mentions to some files in some directories that do not exist in the update nor base game, mostly stages.

A Link costume set was included alongside other costumes before v1.2.0.

While every other costume not obtainable in the base game was periodically released following launch, this was the only costume that would never see the light of day. In v1.2.0, all references to the Link set were removed.

An early version of Luigi's model is present in the base game. The final Luigi’s Balloon World model adds key features including a bowtie, additional expressions, and textures that match Mario's better. Luigi appears to be much darker, and the backpack was changed to a suitcase with black straps. 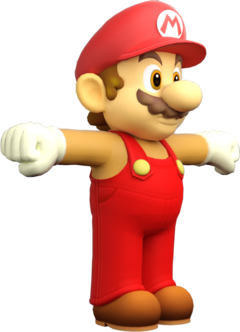 A Super Mario 3D World leftover model of Mario, with his outfit recolored to look like Mario's color scheme in Super Mario Bros. 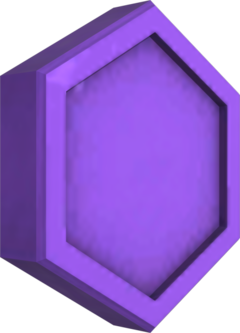 A placeholder model for regional coins. A duplicate exists as CoinCollectM.

Copy of the sky used for Sand Kingdom's nighttime scenario. Texture names are the same.

The jingle used for getting a Multi Moon during the "A Traditional Festival!" mission in New Donk City has an unused 8-bit version.

This is the title screen music from the game's E3 2017 demo, as suggested by the filename. It's a version of the NDC theme that has been stripped down to just the piano and trombones with some percussion.

Located in LayoutData/TestText.szs is a simple test layout with these animations: Appear, End, and Wait.

There are multiple text files left over from the demo used at E3 2017 and later events.

Unknown characters/tags are replaced with the raw hex value in square brackets. The text can be found in can be found in LocalizedData\[region]_[language]\MessageData. These appear, translated, in all the text files, even though the demo was only seen in English and Japanese.

It isn't known where in the E3 demo this was used exactly, or if it was used.

Used in the course selection screen.

In the Metro Kingdom, there's a room with a 2D section and a music note that when collected, makes a group of them appear for Mario to collect in both 2D and 3D. This area has a second mirrored copy of the room stored just off-screen, which cannot be seen without hacking and appears to serve no purpose in-game.

There are several unused Kingdom scenarios in the game.

The triple Power Moons are called Multi Moons in the English, French, Dutch, Italian, German, Russian and Spanish versions. In the Japanese, Korean, and Traditional Chinese versions, they are called Grand Moons (similar to the Grand Stars in Super Mario Galaxy), as in the E3 2017 demo.

To officially sell the game in China, various game aspects had to be modified to comply with local regulations.

All English words on the world map were removed, including coordinate labels[1]. This change also applies to the map outside the game itself, such as on the cartridge[2] and download cards.[3]

In the Lake Kingdom Balloon World Scenario, there are new areas found with the name "BalloonGameSettingAreaAdd". All instances of this area are commented with 地形抜け対策サーバー用 which roughly translates to "For terrain omission countermeasure server". This hints to a feature that prevents you from placing Balloon World balloons out of bounds. For obvious reasons, this feature cannot be tested outside of China.

The CapRack actor checks for a boolean flag called "IsUseCaptionThankYou", if this is true it will display the text "thank you very much" when cappy is thrown at the scarecrow. The coins in Darker Side have this flag too, but it goes unused in the code. This is exclusive to the China release.

Fixes a sequence break in the Cascade Kingdom that made it possible to jump around a Nintendo-grade™ invisible wall and go straight to the boss without collecting any Power Moons beforehand.

Adds support for the Korean language.

Adds Balloon World, a minigame starring Luigi that's unlocked after completing the main game, as well as a plethora of new outfits (most of which are time-locked). It also adds a few filters to Snapshot Mode, adjusts the difficulty, and fixed a bug that allowed people to easily max out the score for the Jump-Rope Challenge (resetting the leaderboards in the process).

The Sand Kingdom's Hint Art for the Bowser Kingdom was changed so that the Checkpoint Flag has a red pole instead of yellow.

The four grassy platforms in Cascade Kingdom (which appear after beating Madame Brood) were added to the map, and the bridge that collapses after collecting the first Moon is now shown in its collapsed state on the map.

Dark Side's map shows various platforms and edges from an earlier version of the world. These bits were removed in the Balloon World update.

The picture the player receives after completing the game has been altered slightly to add Luigi and his balloons in the background.

Adds additional content for use with the Labo Toy-Con VR Goggles, as well as fixing various unspecified bugs.

The game's internal project name is "RedStar", according to paths in the executable.