There is some additional information relating to this game's development on the Mario Kart Wii page.

There is an unused sequence for a menu in the sound data of the game, called SSEQ_0005. It is one track away from the records screen, so it might have been used there. It has a resemblance to the Wi-Fi menu theme, and the settings theme too.

It has similar tracks/channels to the Options theme, possible case that this might also be an earlier version of the said theme.

There is an unused archive called "KartModelMenu.carc" that was apparently planned to be used to house the models and textures of the karts and drivers on the selection menu.

An earlier version of Daisy's CPU model, found in the unused KartModelMain.carc archive. Her head and arms are slightly different, matching her current appearance. The crown of the used model has some pink on it, unlike the unused one.

KartModelMain.carc also contains an early CPU model for Shy Guy, which is carried over from the Kiosk Demo. It is very simple and lacks 3D arms and feet. It is also green unlike the final model which is red.

Some of the courses have unused routes (PATH and POIT), most of which are leftovers from earlier replay cameras for the tracks they're in.

CAME 8 and 12 have leftover route speed settings (82 and 30), but have no leftover paths. Also the case in Kiosk Demo's track, suggesting they used paths in an earlier version of the track.

CAME 16 has a leftover route speed setting (20) despite not using a path.

Mission 2-5 (mr11_tool.nkm) also has a unused path with two points, placed on where the second boost pad is. Purpose unknown.

Path 2 with two points is unused. It's located on the first S curve before the mansion. Probably meant for CAME 7 as that and the AREA 4 (where it's assigned to) is located on where it is. The said camera also has a leftover route speed setting (27) in the Kiosk Demo, making this a possible case. It's reset to 0 in the final, through.

CAME 9 and 17 have leftover route speed settings (35 and 45) despite not using paths (maybe removed).

Path 1 is unused. It begins from the starting line and goes towards the Pianta statue, probably used by CAME 7, as it's the only camera between the ones using Path 0 and 2, and it even has a leftover route speed setting (55) in the Kiosk Demo version, which is reset to 0 in final. CAME 9 and 19 also have leftover route speed settings (30 and 25), suggests they once used a path also (they don't have a leftover path however, unlike CAME 7)

Path 7 with five points is unused. It's placed right before the starting line and moves towards it. It might have been meant for CAME 1 as that and AREA 4 (which uses it) are placed on where it is, and has a leftover route speed setting (20). CAME 16 and 17 also have leftover route speed settings (65, 35) despite not using paths (might be removed).

Among the 13 paths set on this course's NKM, PATH 6 is unused. It begins from the entrance to the snow area and goes to a bit further of the track, likely meant to be a camera path.

CAME 2, 5 and 9 have route speed set despite not using a PATH; judging by the order of PATH ID settings in the CAME, this unused path might be meant for CAME 9, since it's between the ones using PATH 5 and 7.

CAME 7 has a leftover route speed setting (55) from wario_course (earlier version of the track) where this camera used a path. This was changed to a fixed view camera in both Kiosk Demo and the final's used track.

CAME 8 has a leftover route speed setting (65) despite not using a path (probably removed).

Path 3 with one point is unused. It's placed after the second left turn, and close to where Path 2 (used by CAME 7 which is a replay camera) is. It might be an earlier path for CAME 7, or something for testing. And CAME 6 in Kiosk Demo's track has a leftover route speed setting (85), probably meant for that also.

CAME 12 also has a leftover route speed setting (110) despite not using a path.

Path 7 with ten points is leftover from the removed Luigi blimp that appears in the Kiosk Demo version of the track.

CAME 11 has a leftover route speed setting (40) despite not using a path.

Path 1 with nine points is unused. It's located on the curve after the third turn and goes further. It might've been used by CAME 4 as that (and AREA 5 where it's assigned to) is located on where it is, and also has a leftover route speed setting (150) in the Kiosk Demo's track (reset to 0 in final).

CAME 16 has a leftover route speed setting (85) despite not using a path.

Path 4 with two points is unused. It's placed before the tunnel and goes towards it. It might've been used by CAME 10 as that (and AREA 7 which it is assigned to) is placed on where it is, and has a leftover speed setting (20) in Kiosk Demo's track where it's also unused (but reset to 0 in final).

CAME 2 and 3 (second camera in the GP intro) have leftover route speed settings (20), suggesting they once used paths.

Paths 0, 1 and 2 have two points each, placed on the Goombas' area and are meant for their movement, but none are placed, rendering them unused.

CAME 8, 11 and 17 have leftover route speed settings (55, 45 and 50), suggests they once used paths but no leftover paths exist for them. This is also the case in Kiosk Demo's track, but are all reset to 0 in the final's used track.

Path 6 with two points is unused. It seems an earlier version of Path 4 (the camera before the least one in the award ceremony) due to similar placement, but its first point is placed under the track.

There is an alternative version of the first camera sequence from Luigi's Mansion: a view from the moon and the front side of the mansion, that was replaced by a view through the door.

The second sequence has an alternative version, which is similar to the original sequence, but it has a different angle and was replaced by a more interesting view.

The file mission.mr is a table containing configurations for missions. However there are 28 entries never used by the game, because they were scrapped. Note that MR stands for Mission Run.

The Mission Coin object is able to follow a specified path, with its Setting 1 specifying the speed, however no mission uses this feature.

An unused display capture effect to blur the screen when boosting was found in the code. The final game tries to enable this effect whenever you get a speed boost, but since the blur doesn't get initialized, it gets ignored.


It uses the VRAM used by the ARM7 co-processor in Multiplayer modes, so it's likely that it would have only worked in Single Player Modes. This, and the fact that it can be both disorienting and distracting likely contributed to it getting scrapped.

It can be enabled through an AR code made by Gericom for the EU region of the game.

Various attributes of map objs are controlled by the file grpconf.tbl in /MainRace.carc/MapObj/ the attributes defined by this file are the following; has3dmodel, nearclip, farclip, collision type, width, height, and depth. However there's an unused earlier version of the file in the unused /Main/MapObj.carc archive, that has less entries and different settings compared to the used file.

Replacing the used file with the unused file will result in multiple tracks crashing on real hardware, due to it missing entries for some of the objects. 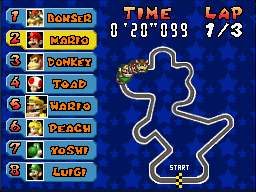 In the palette files for the global maps of unused courses (which are copies of an early GCN Yoshi Circuit minimap), there are unused palette rows used in the E3 2004 prototype.

Palette row 0 is empty, palette row 1 is used by the actual map, while palette rows 2, 3, 4 and 5 are E3 2004 leftovers; palette row 2 contains the palette for the "TIME" and "LAP" labels. Palette rows 3 and 4 have 8 sets of blue and a set of yellow colors used on the rank list. Palette 5 is from when the global map BG was baked into the same file as the global map it's self, this is no longer the case in the final game, so this palette goes unused as well.

There being 8 sets of the same shades of blue in palette rows 3 & 4 may suggest that each player was going to have their own color on the rank list. 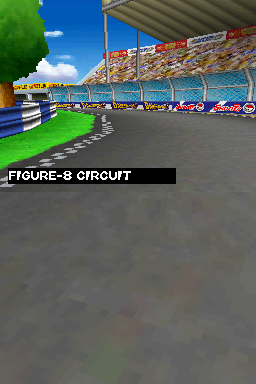 This seems to be a graphic that was used for the course titles' background in the course intro. The NCGR file is empty, but editing it will show a background behind the course's name in the intro.

The graphic uses the first line of the palette file above (shown below). 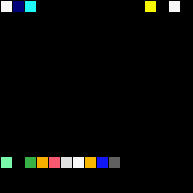 There is a file named BUILDDATE in the //data/boot/ folder, which contains the date and time the game was compiled:

Located in the ARM9 binary is text, regarding a Ghost Data test, which suggests the internal project name of the game was "NitroKart". 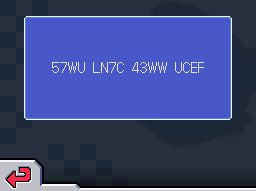 If you press Up, Down, L, R, Y, A in the Time Trials records, a 16 character code with information on your ghost will appear. This was used for an official contest held by Nintendo's Japanese website, like in Mario Kart: Double Dash!!.

A fan-made decoder is available online.