Version 1.0 of the Aging Card NTR debug cartridge uses an early screenshot of Super Mario 64 DS in some of its tests.

The cannon's platform seems to be missing, while the textures of the dirt, grass, and distant cliff appear to be much closer to their Nintendo 64 counterparts. The sky texture seems to be completely different and more cartoony.

At E3 2004, the game was announced, materials were released to the press, and a demo was playable on the show floor.

Super Mario 64x4: The landscape and the characters all look familiar. This is the opening castle area of Super Mario 64™, only with a few DS twists thrown in. Up to four players can link up using the wireless capabilities. Players move familiar characters like Mario™, Luigi, Yoshi® and Wario™ around the 3-D landscape, exploring and looking for stars. While one screen shows the player’s character position, the other provides an overall map of the area. Touch a spot on the screen to pop the camera over to another player’s position, or to take a close-up look at the castle.[1]

This seems to be an earlier build than the show floor demo - unlike in that, the trees are the wrong height here. 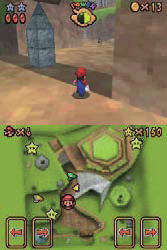 Page 23 of the manual has a screenshot featuring different Silver Star icons on the Touch Screen.

On Page 32, the first page of the Minigames section, there is a screenshot featuring an early rabbit design. The inside of its ears are black instead of white, and its fur seems to be darker than the final, although its hard to tell for sure.