The Aging Card NTR is a debug cartridge for testing the Nintendo DS. The name of the article is based on the cartridge's label; aside from the other official names at right, the software is also known unofficially as "NTRAging" and incorrectly (due to a translation error) as "Actual Inspection Card NTR".

The oldest known version is dated August 18, 2004, a little over three months before the system's launch. A lot of the content in this cart is reused from the AGS Aging Cartridge (or is it the other way around?). As such, some of the unused content here is in that cart as well.

To boot straight into the main test, hold Select at startup or for the menu, hold Start. If you do not hold either of those, you will get an error message. If you wish to see the current result of the self-checker, hold L + R + A + B + X + Y and you should see a debug screen showing the name, version, time elapsed, name of current test, frame, result, and overall result. Pressing B at this screen will send you to the menu, and pressing A will restart the self-checker. 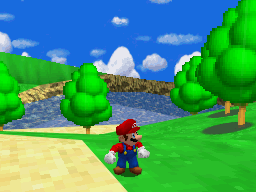 While not unused, an early screenshot of Super Mario 64 DS can be seen in some tests. A comparison can be seen here.

All of these can be heard in the Sound Test.

The music track used in the AGS Aging Cartridge.

The opening of the Super Mario Bros. theme.

The screenshot of v11.0 is taken from the December 2020 Nintendo leaks, specifically Page 60 of Documents.7z/セキュリティチーム運営/プロジェクト/INDY検討/eFuse検討/ＣＴＲ本体電気検査仕様書.pdf.