The SNSP Aging Cassette is one of several SNES test cartridges produced by Nintendo in the early 1990s. It consists mainly of another iteration of the burn-in test featured in the SNES Burn-In Test Cart and SNES Test Program, including some of the same early Super Mario World graphics. The "SNSP" abbreviation indicates it was probably intended for usage only in PAL regions.

Also, the music in this version of the test is a Nintendo-flavored rendition of "When You Wish Upon a Star" from Disney's Pinocchio, for some reason. 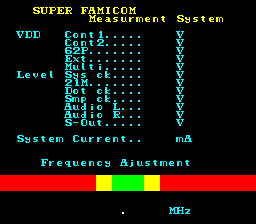 In addition to the normal test routine that runs on a loop when you fire up the cartridge, there's also an additional routine at CPU address $00B0D6 that does not seem to actually be called anywhere. Running it displays this screen, which runs infinitely and attempts to read some hardware measurements using an unknown device on the expansion port.