SFX Test is an SNES test program that was found among the files from the July 2020 Nintendo leak. Notable for containing a primitive Mario game with elements from Super Mario World, as well as using sounds and music from The Legend of Zelda: A Link to the Past.

The ROM can be found as snd_test at other\SFC.7z\SFC\ソースデータ\ゼルダの伝説神々のトライフォース\日本_Ver3\asm, though it should be noted that it has no filetype, and must have ".sfc" added to its name before it can be used. Text present in the ROM dates this program to December 26, 1990, just over a month after Super Mario World was released and nearly a year before A Link to the Past would be.

The program's sound data (also from A Link to the Past) is not included in the ROM. Use this patch to add the sound data:

A sprite of a Warp Pipe. It's identical to the final pipe sprite from Super Mario World, just with a different palette. Likely intended for the primitive Mario game.

A sprite of a ? Block. Unlike the Warp Pipe, this appears to be a unique sprite. Shown here with the ground palette, which appears to be its intended palette.

A mysterious girl who appears to have been the original player character for the platform game before being replaced with Mario.

Interestingly, the palette Mario uses when he gets hit in the second level is actually hers!

Out of the game's main alphabet, the letters Q, W, and Z are unused. Other unused font characters include a question mark, a horizontal line, a multiplication symbol and a duplicate of the minus symbol (which is used).

Four small pink arrows, each one facing a different direction.

Red numbers in brackets. Only 0 and 1 are used.

A whopping 48 tiles for the numbers from the "DOT EDITER" screen are unused! Only the first row (00-0F) is used.

More miscellaneous graphics: four quarter-circles in the Super Famicom logo colours, a box made of dotted lines, a grey line and a dot, and a duplicate of the pink cursor with a black background.

Even more miscellaneous graphics. They generally seem to be border-related.

A set of colored squares. The one on the far right has two miscolored pixels.

Another set of colored squares. These are nearly identical to the other ones, with the only differences being that these ones are slightly smaller and that the rightmost square has a checkerboard pattern.

There are multiple black squares like this one scattered throughout the graphics. Some are different colors, but they all appear as black in-game. Some are used, some aren't.

Duplicates of the tiles for the Mario game, including the unused ? Block. Contrary to what you'd expect, it's the ones next to the unnamed girl that are used rather than the ones that are next to Mario, with the exception of the cloud.

This frame of the Goomba-like enemy walking is unused. The game simply flips the first frame instead. However, this frame is simply the first frame flipped horizontally, so there's no visible difference. 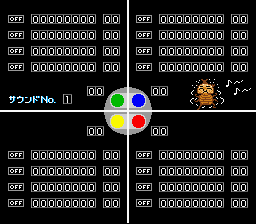 A screen showing a sound test. There are four sections, each with four groups of eight values that can be switched between 0 and 1, and themselves each affect another set of two values, which can also be edited manually.

These groups of values can be toggled on and off by pressing Start.

Additionally, pressing Select allows you to access the groups of two values in the center of the screen.

There's a graphic of a Super Famicom controller's buttons in the center, and what appears to be a dancing rhinoceros beetle on the right.

Using Controller 2 allows you to play sound effects and music from A Link to the Past, which this program uses the sound data of. The Mario game is the only other part of the program that has sound. 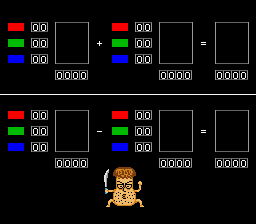 A screen showing a color test. It features two sections where you can combine two colors to make another one, as well as a strange phallic-looking character with a sword at the bottom of the screen. 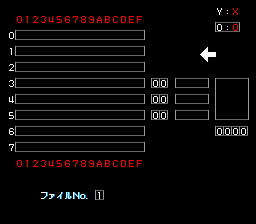 A screen featuring eight meters numbered 0-7, as well as a color mixer like the ones seen in COLOR TEST. There are also two numbers at the top-right of the screen.

Pressing Y turns the arrow at the top-right of the screen, allowing you to edit whatever it's pointing at. Changing the color of the rectangle from COLOR TEST allows you to apply different colors to the spaces in the meter.

Pressing Select resets the cursor to the top-right of the screen, as well as resetting the direction of the arrow.

The Japanese text seen here (ファイル), as well as in DOT EDITER below, means file. 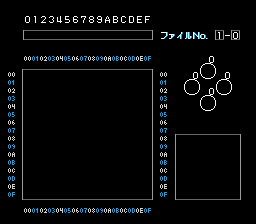 A screen with another meter numbered 0-F above a square with all four sides numbered from 00-0F. There's also a set of two numbers that range from 0-8 and 0-7 respectively on the top right, with controller buttons and a smaller square below them. Pressing Select moves the cursor to the big square.

Strangely, this option takes a few seconds to load after being selected. All of the other options load instantly.

Unfortunately, it doesn't seem to be functional, with only the numbers on the right being editable. 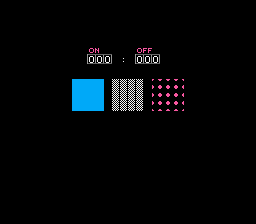 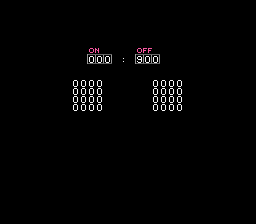 The squares also have a second state. In this state, the middle square disappears and the other two turn into 0s. 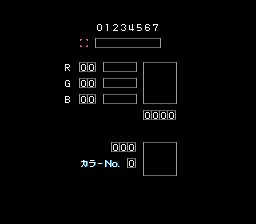 A screen showing a meter like the ones from COLR TABLE and three sets of three values changing the color of a rectangle like COLOR TEST, as well as a square accompanied by a set of three numbers at the bottom.

Pressing Select moves the cursor to the color mixer. From there, the cursor can be returned to the meter to apply different colors to the squares in it, like in COLR TABLE.

Pressing Start moves the cursor to the square at the bottom of the screen. Changing the 3 numbers located down there causes the square to cycle through the colors on the meter at different speeds. 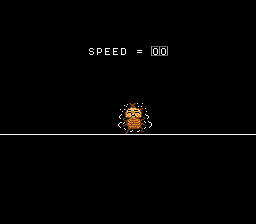 A screen showing a set of two numbers labelled "SPEED" and the rhinoceros beetle from SOUND TEST. Changing these values causes the beetle to move left or right at different speeds. 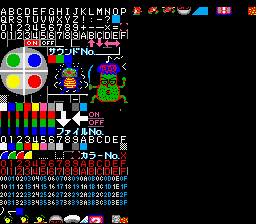 Displays the CHR set for the program. That's it. Strangely, the graphics for the Mario game are missing.

Most of the unused graphics can be seen here.

Options 8-10 and 15-19 are inaccessible. Whether they exist in the ROM is currently unknown.

Options 11-14 are blank, but contain levels of a primitive Mario game!

Left and Right do what you would expect. B makes Mario jump, and holding Y makes him dash. Up and Down don't do anything.

Mario uses his early Small Mario sprites from Super Mario World, and there are two enemies: a strange Goomba-like enemy with glasses, and what appears to be a Super Koopa. The Goomba-like enemy simply walks around, turning when it reaches a wall, while the Super Koopa-like enemy flies to the right in a wavy pattern. Interestingly, they can wrap around the screen but Mario himself can't.

The coins are gray circles with red text saying "コイン" ("Coin") on them, and the levels are made up of grassy platforms, stone blocks, and clouds. The levels also have what appears to be Mt. Fuji in the background.

Each level consists of a single screen that wraps horizontally. Pressing Start at any time restarts the level.

The game uses sound effects from A Link to the Past, some of which don't completely fit. Which sounds are used changes between levels, suggesting that the developers were experimenting with them.

The game is quite glitchy, and Mario's physics seem to change slightly depending on which level you're playing. Strangely, Mario moves to the left faster than he moves to the right.

Mario also has knockback when he takes damage, similarly to Super Mario Bros. 2. 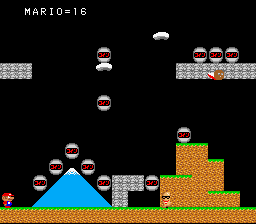 The first level. Mario starts with 16 hit points, and will die if he runs out. This is the only level where Mario has an actual death sequence; when he dies in the other levels, the level simply restarts. When Mario dies, the text "GAME OVER" appears on the screen, with the text "HIT START" below it.

This is the only level that has a HUD. It scrolls with the rest of the level, and displays how many hit points Mario has left.

There's a brief sequence before the level starts where the word "READY!" appears in the middle of the screen for a few seconds. Mario can't move during this.

Collecting all of the coins causes the enemies to despawn. A few seconds later, the word "GOUKAKU!!" ("Success!") appears. Below it is the text "HIT START" like in the death sequence.

There are three hidden blocks under the coin that's in the air, but they're difficult to hit due to the wonky physics.

Mario can get trapped under the alcove made of stone blocks. Jumping while in it can also cause Mario to teleport to the top of the screen.

There's also a moving cloud that can be controlled by pressing Up or Down. Jumping on it causes Mario to ride it. This is the only object besides Mario and the enemies present in any of the levels. 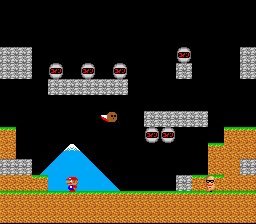 Interestingly, Mario's physics are noticeably more refined in this level compared to the first one. Mario flashes when hit, which doesn't happen in the first level, though he can't die.

Mario also jumps higher here compared to the other levels.

Additionally, the level doesn't end after collecting all of the coins. 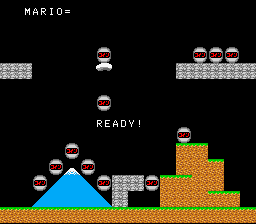 A duplicate of the first level, with the only difference being that Mario and the enemies are absent. Because of this, the game never progresses past the "READY!" screen. 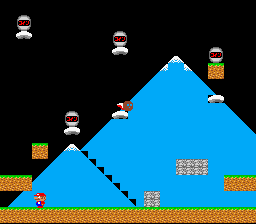 The only level that lacks the Goomba-like enemy. The Super Koopa charges at Mario when he's on the same horizontal plane as it, which doesn't happen in the other levels. The Super Koopa also flies up and down faster and in a smaller wave.

Mario can go inside the stone block on the floor. Jumping while inside of it has a chance of teleporting him to the top of the screen like in the first level.

Additionally, the background in this level is noticeably unpolished: it doesn't loop properly, and there's noticeable cutoff where the clouds and mountains meet.

Pressing L + R returns you to the main menu, though the frame advance function will be activated in the process, requiring L to be pressed again before you can do anything.

For some reason, this doesn't work when playing the Mario game.

For some reason, this program uses the header from Super Mario World. It shares this trait with Super Donkey.

For some reason, in the fourth level of the Mario game, the Super Koopa uses a different palette. This palette doesn't seem to be used anywhere else. This is not visible in-game.

Some of the letters and numbers used in the program have shadows. However, these usually aren't visible due to being the same color as the background.

Some of the other tiles have details that are rendered invisible by this too. Some of them are completely invisible because of it!