Nintendo's first Dual-Screen platform, this third pillar happily coexisted with both its predecessor in the Game Boy line and its competitor from Sony by immediately monopolizing practically the entire handheld space. Known early in development as the Nitro System - a name which survives through the line's serial code, NTR - and later the City Boy, its intuitive touch-screen control, strong third-party support, and low-cost high-capacity game cards quickly resulted in it becoming the most successful handheld platform in history.

And it prints money!

Commercially-released DS consoles normally have the buttons A, B, X, Y, L, R, Start, Select, and the D-Pad - the ones used during normal gameplay in commercially-released games. However, there is another button called DEBUG which is only present in dev units. The DEBUG button is stored (like X and Y) under an address for DS-exclusive buttons, unlike the rest of the buttons which were also present on the GBA.

It is possible to get DS games to recognize this button input by using the DeSmuME emulator, but it is otherwise unused.

Like the DSi and 3DS, the original DS has hidden button combinations which are not documented in the DS' instruction manual. There are two requirements which must be met in order for these combinations to work:

By holding A + B + X + Y + R while powering on, you can force a DS game to boot regardless of setting up the system. Holding A + B + X + Y + L will instead boot the inserted GBA game. Unlike the DSi or 3DS, booting a game this way seems to have little to no effect on its functionality: the user settings will be whatever the system had before reseating the battery (besides the time, which will be reset to its defaults), and connecting to the internet works normally.

If instead the console is in normal operating conditions with the game auto-start option enabled (which, after the Health & Safety screen, tries to autostart Slot-1 and 2 in this order before displaying the main menu), holding B during the end of the logo animation will skip the DS card, while Start will ignore both and force the menu to load. 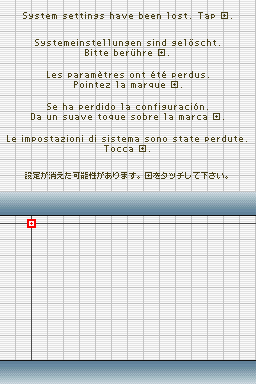 If the language or calibration settings are corrupted or erased, the DS will boot into a hidden setup menu which allows the user to set these settings. Corrupting these settings normally would be a very tough job, as the original DS saves its settings in two separate places; however, opening a firmware dump with a hex editor and changing the values at offsets 0003FE64 and 0003FF64 to 06 will corrupt the language setting, causing this menu to appear. Upon startup, the user is prompted to first calibrate the screen, then set the language. Afterwards, the system will load the User Settings setup which normally appears when reseating the battery. The previously-mentioned button combinations will also work when used on this screen.

This error message string exists in the ARM9 boot code in at least one version of the firmware.

All DS games have banners that show on the DS menu at start-up when the cartridge is inserted. The graphics for these banners are located in an overlay file called banner, under the ftc directory.

However, many games on the DS have duplicate and sometimes unused variants of their banner graphics lying uncompressed elsewhere in the ROM out in the open, often in a banner directory. It is unknown why, since the DS doesn't use or check for these files. Notable games with such unused alternate banners include The Legend of Zelda: Phantom Hourglass and Learn with Pokémon: Typing Adventure.

On a related subject, Wi-Fi Download Play files are stored as standalone DS ROMs inside the main game ROM. They have data for banners which goes unused anyways. Often it is just a duplicate of the banner for the main game, but many pre-2006 games used a placeholder banner (pictured here) probably from an SDK for the banner. The internal title for these is Nintendo DS - Demonstration, translated to all languages.

There are also many DS games where this banner is a leftover from the DS SDK for the multiboot ROM header. The text is "icon" written in katakana. Examples of such games include Final Fantasy Crystal Chronicles: Ring of Fates and LEGO Star Wars III: The Clone Wars

iQue DS, the Chinese version of the original Nintendo DS, has region-protected games unlike all other versions. They are unplayable outside Chinese consoles, triggering an error message ("Only for iQue DS", in English) that changes from red, to orange, to yellow and back. This protection can be circumvented by changing 0x1D (ROM region) from 80 to 00. For some reason, the DSi and 3DS do not trigger the protection and will play iQue DS games.

A whopping five games were released for the iQue DS, not counting the Nintendogs game included in the iQue DSi internal memory:

Regular DS systems have a language option in all firmware. The iQue DS replaced Japanese with Chinese, while the Korean DS replaced Italian with Korean.

For DSi systems, the option for changing the DS language is only present in US and European firmware. Japanese, Korean, and Chinese models of the DSi do not have this option and default to their respective language if available (or English for non-Chinese models).

Also, aside from some early DS releases (like Project Rub, Sonic Rush, and The Rub Rabbits), many Japanese games that were localized to the US or Europe have their Japanese language option unavailable, even when setting the firmware to Japanese. Likewise, US versions often dummy out in a similar fashion any languages other than English (and sometimes French and Spanish), and Japanese games that already have an English script (like Kousoku Card Battle: Card Hero) only have the Japanese language option available. 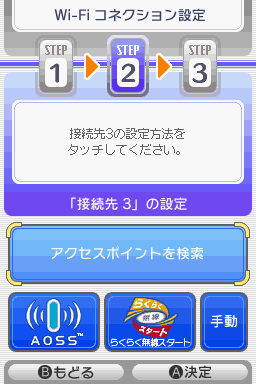 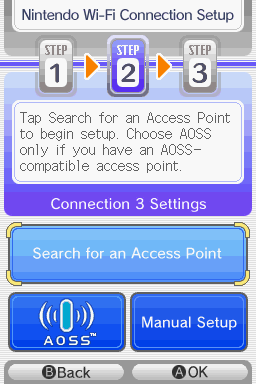 Similar to the AOSS option in the US Wi-Fi configuration menu, there is also a Simple Start option, allowing to connect your DS to a Simple Start compatible router. However, since these routers are Japan-exclusive, the button for this option got removed from the Wi-Fi configuration menus in American, European, Australian, Korean, and Chinese games.

It can still be accessed in these versions, translated (to English only) and fully working if used with such routers, but you'll need to offset the Touch Screen calibration: at the very end of the calibration process, when asked to press the spot at the square's center, press its bottom-right corner instead. When you enter Step 2 in the in-game Wi-Fi configuration menu, you can access this option by pressing the pixel in the top-left corner of the Touch Screen. This is also still present (and much easier to trigger in native resolution mode) on the 3DS' version of this menu.

The DS Lite officially added four backlight brightness levels, while the original could only toggle the backlight on and off. However, the last minor revision of the original model (which shipped with v5 firmware) supports multiple levels of backlight in hardware, which can be toggled using homebrew or by installing FlashMe.

The DS has a quite interesting way of reporting its firmware version number. To trigger this:

If done correctly, depending on the firmware version, it will exhibit different behavior: