A kids tablet that is, like the Leapster before it, built off of the magic of Adobe Flash. Also, those apps cost a TON, usually being $10 each (yes, you read that correctly).

There is a secret developer mode hidden in the firmware that can be activated by setting the developer flag on the LeapPad using LeapPad Manager (download, unzip, and launch the software, connect the LeapPad via USB, and on the navigation bar, click LeapPad -> Connect, then once it's connected, on the menu bar, click Development Tools -> Load Dev Mode). This will enable features like FTPing into the LeapPad via USB (which can be used to rip files and such), and some extra options in the Parent Menu (accessed by holding Volume Up and Home on the login screen). Specifically, these options include Cheats (which doesn't appear to do anything, it may have been used during development to test certain areas within games) and a debug level (currently undocumented).

The only caveat is that enabling this mode will disable the normal communications using LeapFrog Connect (or an equivalent tool that uses the same protocol, like LeapPad Manager). The developer flag (located in /flags/developer) will need to be deleted via FTP to escape this mode.

There are some unused narrator voice lines in the files and some of these seems to be early versions of already existing quotes.

This is an early version of the narrator giving a hint when the player earns a new badge. Final's doesnt mention leapworld and sounds less excited.

An early version of the narrator giving hints when the player taps on your profile section to go to about me. This version says level rather than grade in the final (likely just an early name for it).

An unused hint which wouldve obviously be used if the player had a offensive name. Despite being so, this is unused as you are allowed to have inappropriate names in your user.

This is an unused hint which wouldve been used as a warning whenever the player tries to change their name. Goes unused as data is sorted by id, not username.

This is an unused hint by the narrator which has an unknown purpose. This likely just for testing.

This is an unused narrator voice clip which would've been used as another hint on how to drag apps. The narrator only talks about how to drag something, therefore making this unused.

The LeapPad Explorer was built off of the Leapster Explorer, and so there unsurprisingly are some leftovers.

Some images from the Leapster Explorer made it over to the LeapPad: 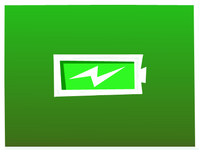 Leftover charging screen. While the LeapPad2 does have a rechargeable battery, this screen also goes unused there since the power light glows orange when the system is charging, eliminating the need for a charging screen.

Leftover app launch sound effect. The final's is much simpler, being the default "click" sound.

Oddly, the internal name for the Leapster Explorer is also revealed in the files (Emerald).