The PlayStation 3 is Sony's third home console that was once thought to be unhackable...

While the branch names and the amount of lines changed throughout the revisions, starting from v4.60 a small amount of branch names were slowly reduced, and by v4.66 they were fully stripped and replaced with "@svn+ssh".

In firmware versions before v3.00, the startup screen uses an orchestral tuning sound with the words "Sony Computer Entertainment" on it. This was replaced with a different tune along with a new startup, featuring the "PS" logo and the new "PlayStation 3" logo, in firmware v3.00.

Also during game boot, originally you were greeted with a "PlayStation 3" splash screen featuring the Sam Raimi Spider-Man-style font. This was removed in firmware versions after v3.00 and instead boots directly into the game. 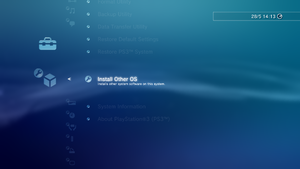 Early PS3 consoles had the option to install other operating systems, such as Linux or FreeBSD, after repartitioning the hard drive. This feature was removed in later models, as well on the supported models running firmware 3.21, released in March 2010.

This prominent retroactive removal of an advertised feature was quickly determined to be an infringement of EU consumer rights, and much later the same conclusion was recognized in the USA. 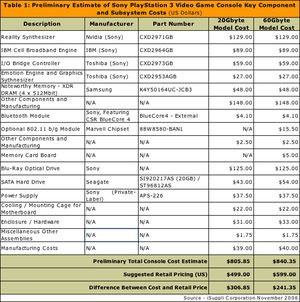 The very first PS3 models (CECHA and CECHB) contain a PlayStation 2 Emotion Engine + Graphics Synthesizer chip (combined CPU and GPU), as well as its RAM, to ensure quite-accurate backwards compatibility for PS2 games (although the IOP and its memory, as well as supplementary hardware like the mechacon, Network Adapter, and HDD are still emulated). This, like all later-developed PS2 modes, runs for performance reasons as a separate lv2 kernel, namely ps2_emu.

In an attempt to cut production costs that greatly exceeded even the famous Five Hundred and Ninety-Nine U.S. Dollars retail price, models CECHC and CECHE remove the Emotion Engine while retaining the Graphics Synthesizer, resulting in partially-emulated backwards compatibility (ps2_gxemu). This also caused compatibility issues with some games.

Ultimately, all future PS3 revisions removed PS2 disc support entirely, leaving only the later PS2 Classics line of digital re-releases as the only official option. They run (on any model) in ps2_netemu, which uses fully software emulation of limited accuracy, does not support most USB accessories or the Network Adapter, and uses encrypted disc and memory card images (which, unlike the Virtual Memory Cards used by the other kernels and accessible under Game > Memory Card Utility, appear under Game > Save Data Utility (PS2), are per-user and cannot officially have saves imported or exported). ps2_netemu also contains a debug menu, accessed by pressing Home to display the emulator's menu then inputting the same key sequence as above.

Curiously, on "non-BC" models, the Memory Card Utility can still create and edit virtual PS2 memory cards, despite this feature then having no official purpose (unless the owner of such a console also happens to have a Memory Card Adapter and wanted to use that system to backup saves in .PSV format for a PS2-compatible console).

This might have been because a software emulator compatible with disc titles, ps2_softemu, was in fact developed to some degree, but never officially used and removed since system version 4.10.

Early PS3 consoles (up to and including the CECH-E) had the ability to play Super Audio CD, Sony and Philips's fancy upgraded version of the Compact Disc, adding features such as higher bitrates and surround sound with complementary strong restrictions against lossless digital copying. Ultimately, the format was a commercial failure, and Sony would remove SACD support on later models due to the format's unpopularity.

System software 2.00, which introduced the ability to use the optical output at all while playing a SACD, contains the ability to convert the native DSD waveform to 5.1 DTS; this feature was removed in the next version (2.01), leaving only PCM output (which cannot be output in multichannel format over S/PDIF due to said interface's bandwidth limitations).