This page details one or more prototype versions of Game Boy Camera. 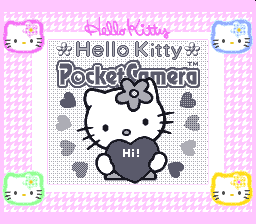 A "Hello Kitty" version of the Game Boy Camera was intended for release in Japan, only to be cancelled. A build was discovered among the September 2020 lotcheck leaks.

Unlike the Zelda edition, which is a simple retheming of the regular Game Boy Camera, the Hello Kitty edition nearly completely reworked the menu system (doing away with the "hiding" of large amount of features under Start or Select menus) and features different minigames. Few similarities remain, but those that do are fairly recognizable, such as the on-screen keyboard, the "Blue Danube" slideshow music, and the Pocket Camera branding.

At least two tracks from this version are reused in the Mobile Trainer.