The Nintendo 3DS is the successor to the Nintendo DS, featuring greatly upgraded hardware, much better internet connectivity, a more robust operating system, migraines, and region locking. Also, way too many hardware revisions.

There are a few key combinations hidden within the system software that are not listed in the 3DS' instruction manual.

There are a few requirements that have to be met for this to work:

By holding A + B + X + Y + R, you can force the inserted game card to boot directly, bypassing the initial setup and Home Menu, along with any updates on the gamecard's update partition that would otherwise be required to be installed to play the title.

The following will also occur:

Some games may not take to this mode nicely - for example, Super Mario 3D Land will crash if you attempt to create a new save file (Likely because you don't have any Miis). Additionally, pressing the HOME button, or any software functions that would otherwise do the same as pressing the HOME button, will simply shut off the console. This mode could have been used for kiosk demos that have the Home button disabled, or for Nintendo's repair centers to be able to boot into a diagnostics card if the system can't boot into the setup for whatever reason. Trying to play a New Nintendo 3DS game (such as Minecraft: New Nintendo 3DS Edition for example) on a non-New 3DS using this feature will freeze the system at a black screen.

Some 3DS kiosk demos and other various demonstration software can also set a flag in their icon file that will cause them to auto-boot without this key combination held. The system checks for this flag before checking for the button combination.

If the system's lid is closed, or the lid close sensor is otherwise tricked into believing it is closed (a magnet on any model 3DS and the New2DS does the job nicely, while on the standard 2DS this is accomplished simply by using the sleep slider), holding Start + Select + X and pressing the power button will make the system try to boot from a DS cartridge directly before trying to boot from the NAND.

If L + R + B + Down is held during startup, a confirmation message will appear asking if you want to delete the Home Menu management information. If you have custom firmware installed on your 3DS, this menu crashes.

Right after the system's launch, there were promotional videos released through the version 1.1.0-1 update of the System Menu. The videos were all in a 3D format to allow viewing them in 3D on the 3DS' unique glasses-free 3D screen. There were three videos released: One for Japan featuring an orchestral rendition of the main Super Mario Bros. theme, which was recorded at the Nintendo World 2011 live concert, one for the NA featuring a 3D version of OK Go's "White Knuckles" music video, and one for Europe which features various nature scenes and skydivers. These videos get removed when System Menu 2.0.0-2 installs to the system, as it stubs the contents of each region's title so they no longer contain any data.

"White Knuckles" was at one point also available to watch on Nintendo Video in the US, and when it became unavailable there, it was also available for a while on the 3DS eShop as a downloadable video. 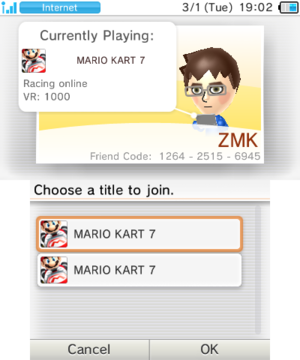 Programmed into the Friend List applet on the Home Menu is the ability to select which version of a game you want to launch, in this screenshot's case, triggered by having two different regions of Mario Kart 7 installed to the system. This feature seems to go unused otherwise, as it is impossible to install a game from a region outside the region of your system without modding the console, and the games that you may expect to trigger the feature (Pokemon games, Animal Crossing New Leaf + The Standalone Welcome Amiibo release of said game) either don't have Join Game functionality in the Friend List or do not trigger this menu.

Besides the region lock that each system implements, there are a few differences between each region.

Ditto to the above, but in the DS Connection settings this time. As said above, the button was not fully removed in the US/EU version of the settings, just moved out of the boundaries of the touch screen (as was the case when accessing these settings on the DS as well). By incorrectly calibrating the touch screen, you can click the off-screen button and access this setup option, however useless it may be outside of Japan. 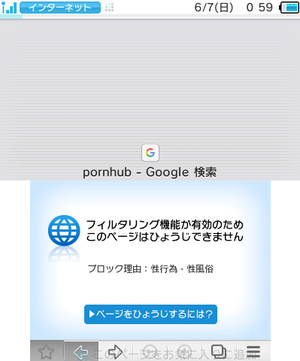 The Japanese New 3DS browser has a filter that blocks pornographic websites (or at least, attempts to) and throws up the message "Because the device is fitted with a filtering system, you cannot open this page." It can be removed with a ¥30 payment, the idea being that kids wouldn't have access to a credit card and be unable to pay this fee as a result. This is completely absent from other regions.

As the 3DS was not initially launched in Hong Kong/Taiwan/Macao, those countries resorted to Japanese imports.

By late 2012, the "Traditional Chinese" model was launched, featuring a red rectangular "Ct" logo on boxes. It predictably failed, according to precedent, to the above. These are the Taiwanese consoles as documented hereafter.

In 2015, these products were superseded by another range sporting a round green "Jp" logo, which are fundamentally different from true Taiwanese systems:

Furthermore, only the appropriate countries and their subdivisions are selectable as residence area.

A step up from the original 3DS model, boasting larger screens and rubber bumpers on the top screen's surrounding plastic to keep the the rest of the system from scratching the Top Screen, as well as a slight rearrangement of some parts of the system, like the notification light, the location of the stylus to resemble that of older DS models, and lack of a 3D slider indicator light.

This model was released the same day as Pokémon X and Y in most parts of the world, except for Korea (which got it about two months later). Additionally, on December 24, 2015, it was announced that the 2DS would be released in Japan as bundles along with the Virtual Console re-releases of Pokemon Red, Blue, Green, and Yellow on February 27, 2016. It sold for a discounted price due to the lack of 3D hardware in the system, and was oriented towards those that didn't want the 3D. However, it came at a price: the system uses a single mono speaker, Sleep Mode is toggled with a switch because the hardware cannot fold to close, and the Power Saving mode is not present.

Other than that, the 2DS' hardware is fairly similar to that of the 3DS/XL. It can play all regular 3DS games, but is simply not able to display any games in the 3D display mode, as the screen lacks the required technology. Interestingly, the two screens on the 2DS are actually two sections of a single larger screen.

This model of 3DS boasts a large boost from its predecessors. It includes more RAM, NFC support, a slot for MicroSD cards instead of standard SD cards, ZL and ZR buttons, and a second analog nub beside the ABXY buttons, eliminating the need for the Circle Pad Pro. It also has some software improvements, such as the ability to play video files directly in the built-in browser. The New 3DS has support for interchangeable cover plates, allowing users a degree of customization.

It also contains some additional system titles built into the system, such as an SD File Manager that allowed you to manage the files on your microSD card through creating a temporary SMB share on the WiFi network it was connected to (with some clever hacking, you can get this application to work on older 2/3DS models).

This model is exactly the same as the New 3DS hardware-wise, but it is bigger and lacks the ability to change the faceplates; however, just like every other Nintendo XL system, it has larger screens. In a business move by Nintendo of America, only this version of the New 3DS line was available in North America for nearly eight months, as the XL outsold the regular-sized one by a margin of three to one. Certain units come with IPS screens, while others come with TN screens; however, Nintendo does not distinguish between them.

Retains the same general clamshell design of its 3DS predecessors, but with a Top Screen that lacks 3D stereoscopic support. It does not have a user-removable battery, either. Bizarrely, wireless communications cannot be turned off as there is no switch or button in the Home Menu options. Otherwise, this model adopts the button layout, size, functionality (excluding 3D), and internal upgrades commonly associated with the New 3DS XL model. 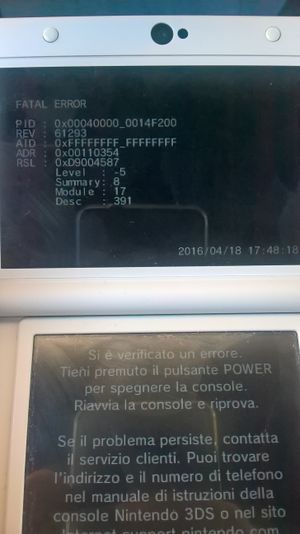 UNITINFO CFG9_UNITINFO is a register read by the ARM9 processor of the 3DS that dictates whether the 3DS will be a retail unit or a few varying types of development/debugging unit. Normally, this register’s value is 0 on a retail unit, and 1-3 on a development unit, depending on the type of development unit, of which there are 3 that can be set by this register's value (Developer, Debug, and Firm). Using homebrew tools, such as Luma3DS Custom Firmware, the bit can be set to a non-zero value to make a retail system act like a development console.

When UNITINFO is set to non-zero, the following changes from a retail system (UNITINFO = 0) can be noted: