Paper Airplane Chase is a standalone version of the "Paper Plane" minigame from WarioWare, Inc.: Mega Microgame$!, released as a launch title for the Nintendo DSi. Not a very exciting launch lineup, but it's something.

Even though this is a minigame previously included in WarioWare, Inc., Wario is never seen or heard in the actual game. In fact, the .sdat file completely removed Wario's voice, but since Pyoro (another unlockable minigame in WarioWare, Inc.) also got onto the DSi Shop, both games share near-identical .sdat files with a few changes.

Unused Paper Plane GBA Title Logo from WarioWare Inc. It's found in any version of the game. 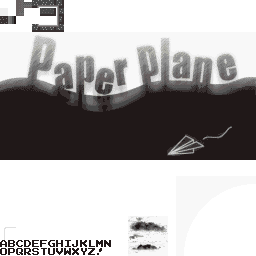 The Chinese version has an "Only for iQue DS" graphic.

This is odd, because there was no way to install Chinese DSiWare on a non-iQue DSi, as the DSi Shop was region-locked. The only way to display this screen is by installing the game on a modified or devconsole DSi or 3DS from any other region.

With the name constantly changing between regions, the game features different title screens for each version.

1P was flipped in other regions to read P1.