WarioWare, Inc.: Mega Microgame$! is the gripping tale of Wario and his friends forming their own game company. The result is a bizarre collection of very short (and often very strange) minigames called "Microgames", with a few "Wario" takes on other classic games thrown in for good measure.

Amusingly, given that this was their first game both in the series and in canon, they left in a bunch of unused stuff.

With a cheating device or a cheat option in an emulator, change address 03000E61 to one of the following game numbers. 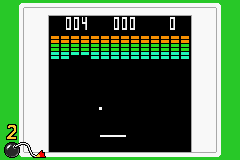 Game Number: 2F
A microgame where only two blocks can be broken before time expires. The paddle gets smaller with each level. This was likely meant for 9-Volt's stage, as it is based on the early Nintendo arcade game Block Fever. 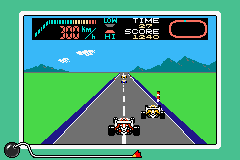 Game Number: 5E
A microgame with all three level variations where the stats at the top of the screen never change. This was also likely meant for 9-Volt's stage as it is based on F1 Race, an early Famicom game.

Level 1 is merely a straight course. 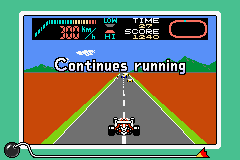 Level 2 begins with a straight path, but curves halfway through. 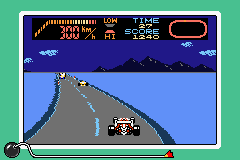 Level 3 starts on a curve, and becomes straight near the end. 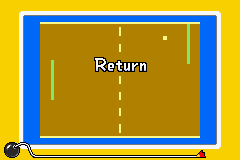 Game Number: 66
A microgame with all three level variations. This was also likely meant for 9-Volt's stage, as it appears to be based on Nintendo's late-1970s "Color TV Game 6/15" home console. However, a similar microgame appears in WarioWare: Smooth Moves. 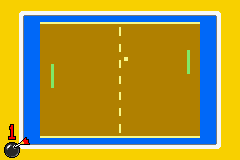 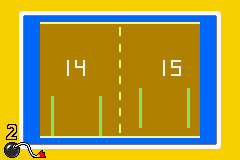 Level 3 has a pair of parallel paddles for each side. 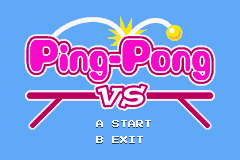 Game Number: E5
A game presumably meant to be unlocked with the other VS titles. 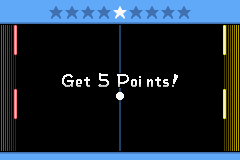 First to five points wins. Like the other VS games, L and R move the paddles up and down for their respective sides.

All 4-bar microgames have an unused 2-bar variant. 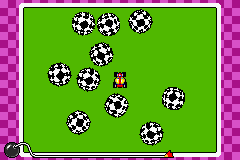 Dodge Balls retains the higher level capabilities present in the demo from Wario World. While in the demo there are only six levels, in the final game there are nine levels altogether, and on the highest level there are ten balls for you to dodge.

The menu graphics contain an unused smaller and darker thumbnail for Jimmy T and a white cell phone folder.

This is loaded into the VRAM of the Introduction grid in place of the microgames it does not have due to being smaller than other grids. Most likely used as a placeholder.

This graphic was most likely meant to be used in the boombox's screen (seeing as it is loaded into VRAM when "Speed Up" and "Boss Stage" messages appear on there) at the moment you lose your last VU and the stage finishes, showing a top score screen. However, Wario's messed up face lingers in the screen when that happens, rendering this graphic unused.

Crazy Cars still has the early version of Wario jumping, as well as a 1UP.

Saving Face contains a closed fist version of the upper hand. In addition, the sprite of the hand is obscured by the stick, leaving part of the hand unviewable by normal means. Naturally, Wario's hand suffers the same fate.

Diamond Dig has graphics for a border with much rounder corners than the used border, and a strange white pillar with brown pixels around it.

Repellion contains an indicator to tell you which ship is yours.

On a slightly less terrifying note, the pole that Wario is attached to is much longer than what is normally viewable, but it does not have any features other than being a plain black bar.

High Hoops has the words "Clear Line", plus an arrow and a line.

Snowboard Slalom has a graphic for an unused pose.

Those graphics suffer the same fate as the Introduction's boombox game over graphic--but instead, they are matched out by the current point (or mile) counter. 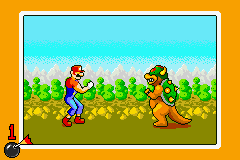 Classic Clash has unused normal palettes for Nintenman and Kaiju.

Bubble Trouble has graphics for a spinning ring.

Space Escape has a large orb with a casing and 13(!) different projectiles.

UFO Assist has an indicator to tell you which ship is yours, much like in Repellion. 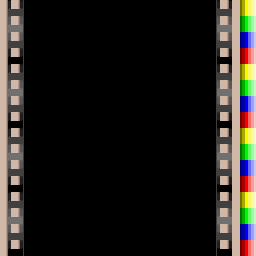 The boss game Galaxy 2003 has graphics for a fourth powerup and a thick white bar. There's also a rainbow-ish band off the right side of the play field.

Gold Digger has graphics for an actual gold nugget.

Fries With That? has a graphic of a girl's head.

Tilt-n-Tumble has a graphic for a smaller ball.

Balloon Fight has graphics for the blue balloons, including the popped graphics and the string. 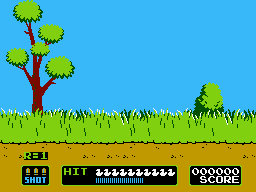 Duck Hunt has the on-screen information from the original NES game, but this is just a graphic that does not change. 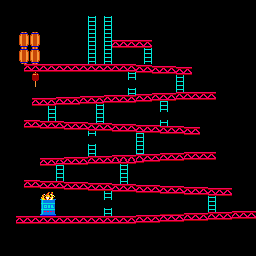 Donkey Kong contains the entire layout of 25m from the original game!

Super Mario Bros. has graphics for a pipe.

Helmet has the word "Home" written offscreen, next to the house.

Among the graphics for Veg Out is a sprite of a corn cob, which doesn't appear in the microgame.

Flower Shower has two other flower colors, plus graphics of the girl not holding the watering can. Possibly cheering.

Leafy Greens has a pink poop that comes in multiple shades.

Veggie Might has the word "Work" and some kind of gem.

Hoppin' Mad and The Frog Flap both have the same tiles.

Wario Bros. has graphics for the POW Block, death sprites for both Wario and Mario, and a full number set (0 and 8 are used normally by the microgame). Wario's death sprite would later be used in the WarioWare: Touched! microgame "Where's Wario".

Float Your Boat has graphics for music notes because Wario is supposed to be whistling when he lands properly.

Vermin has a full set of numbers. These are the unused numbers.

Wario Facial has Wario's gloves and belt placed below the bottom of the screen.

F1 Race has graphics for the word "Nintendo" with a white background.

Pyoro has a small devil among its sprites.