In WarioWare: Touched!, Wario's microgame madness evolves from pressing buttons to tapping and swiping on the Touch Screen. And likely ruining the Touch Screen. Also notable for being the last WarioWare game to have Wario reusing his voices from Wario Land 4.

The game was later re-released as a DSiWare download for 3DS systems as part of the My Nintendo rewards program. 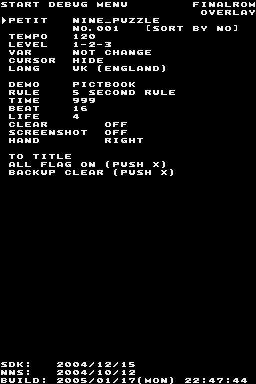 After activating this Action Replay code, hold Select at the Nintendo logo to access the debug menu. Up and Down scroll through the options, while Left and Right cycle through them. Hold any of the directional buttons to skip through them rapidly. Pressing Start will exit the debug menu.

Selects which microgame to start. Pressing L will start the microgame. Exiting via the pause menu will redirect back to the debug menu. A full list is available.

Increases and decreases microgame speed, measured in BPM. Goes from 60-360.

Selects how the microgame should play out. 1-2-3 will go by standard Practice rules, whereas 1, 2, and 3 keep the microgame locked at that level.

Selects which "Travel-to-world" and Hawt House sequence to play (granted either WORLD_MAP or LIVE_HOUSE are selected). Goes from NOT CHANGE - 127, and only loops forward. A full list is also available.

) that moves to where you touch the touch screen. HIDE keeps it off, PRESS appears when the screen is being touched, and ALWAYS keeps it on at all times. A similar cursor was used in the E3 2004 versions.

Picks which stage setting the microgame will be played in. A full list is also available.

When set to "COMPLETE RULE", allows for infinite time for all non-boss microgames.

Currently unknown as to what this does.

Sets how many lives the player starts with. Setting it to "ENDLESS" grants unlimited lives. Hardcore Mix is the only stage exempt from this option, as it will always start the player with one losable life.

Pressing L while this is highlighted exits the debug menu, back to the Nintendo splash screen.

All Flag On (Push X)

Erases all save data. 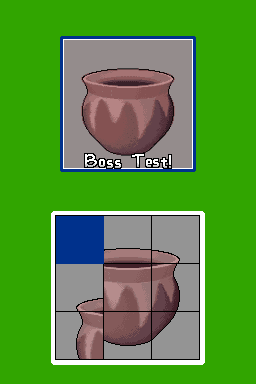 TEST_BOSS (No. 183) is a microgame used for testing bosses. It's just Quite Puzzled with a different caption. 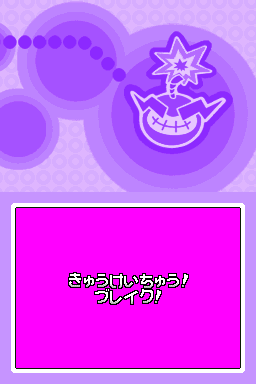 BREAK_ELEVATOR (No. 240) is an unused break scene for the elevators. Strangely, French and German have different English caption text ("Chill!" for English, "Relax!" for French, "Chill out!" for German), whilst Italian and Spanish translate to "Chill". In Japanese, there is text that translates to "Taking a rest! BREAK!".

In the root of the archive, there is a dummy file with no data.