WarioWare: D.I.Y. finally lets players make their own microgames! Your mind's the limit, if your mind is constrained to the DS Touch Screen.

This file, present in the Game folder, contains graphics for a debug menu.

Present with the rest of the fonts in debugfont.ncgr.

This irritated face was likely used to test the color system.

Graphics for an orange being split open. The file for it is only in the Japanese versions.

Present in the Game folder with the debug menu graphics in Revision.txt. 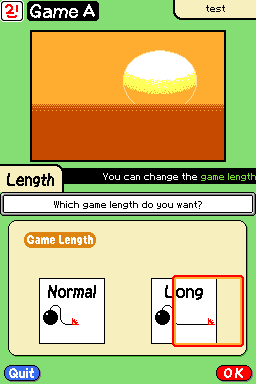 In the Game MakerMatic on the Game Length screen, there is an invisible button that enables the timer used in boss microgames. It can be selected indirectly by importing a microgame with the boss length set (either from the built-in boss games or by editing a microgame using external tools) into the game's DIY shelves via a save editor or ROM editor.

Alternatively, you can use Action Replay code 2??????? 00000002, where "???????" is the appropriate value for your version as listed below. Go into the game length screen in the microgame settings (not in the new microgame screen) and press OK while the code is on.

There are also some graphical leftovers for this button:

The text in all the languages says "boss". The fonts don't match up with their used equivalents.

Each set of microgames has a boss to play against, however, you can't select the boss microgame from a menu like in previous games. This means that the data that would normally go in the menu (boss microgame's cartridge, thumbnail, and descriptions) go unused.

The only way to see them is by hacking the ROM to import the microgame files into the game's DIY shelves.

This is an image that simply says "TGT" on it which means target.

Due to the Nintendo WFC closure on May 20, 2014, medals 108-111 are no longer legitimately obtainable on new save files of the game because they involved registering Friend Codes.