Bird & Beans is a standalone version of the "Pyoro" and "Pyoro 2" minigames from WarioWare, Inc.: Mega Microgame$!, released as a launch title for the Nintendo DSi.

An unused alternative title screen theme meant specifically for this game. Instead, it uses the same theme as Paper Airplane Chase.

This graphic exists only in the Chinese version, as you'd expect. 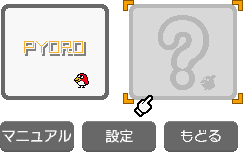 An early test placeholder of the Japanese menu screen. The "Pyoro" logo is different, with the background being plain white.

The "2" was absent from this game.