The Nintendo Zone viewer allowed users to view videos, game screenshots, and other content while at certain hotspots. The app existed on the launch version of the system menu, 1.0.0, but it could not be officially activated until later (see the dates in the infobox). The service was discontinued in North America in 2015, followed by Europe and Japan on March 28, 2018. 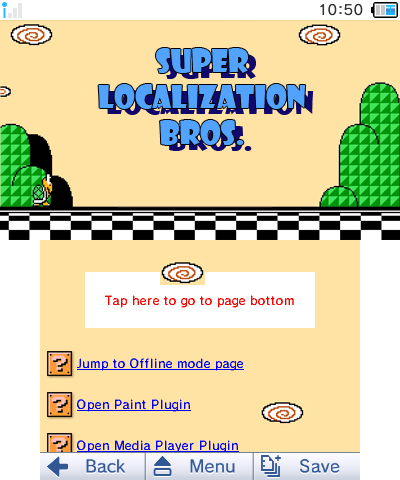 Located in www/localization/index.html is a Super Mario Bros. 3-themed debug menu. It was most likely used to view translated dialogue and error messages during localization of the app.

While most of the links were stubbed for the final version, the paint and media player (which can play .moflex-files located on the app's RomFS) dialogue boxes are still functional.

The page also links to a submenu in www/localization/LUNA_index.html, but the links were stubbed in here as well.

To access the menu, patch Nintendo Zone with LayeredFS and add an <a> tag (a hyperlink) leading to the debug menu's page (something like <a href="/www/localization/index_top.html,/www/localization/index.html">click here</a> should work) to either the "offline_mode" or "boss_page". Because the directory structure is different in different regions, it's recommended to dump and extract the app on your own to get the required files for patching.

A sprite of Raccoon Mario, also from Super Mario Bros. 3.

Rating.bclim contains an unused image with a blue background that says "ダミー" (dummy) on it. 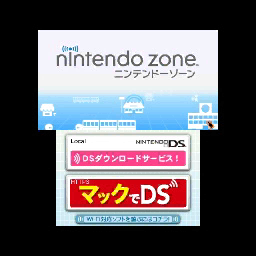 thumb.bclim contains a screenshot of the Japanese version (with the DS Download Service and "DS with Mac" available as menu options; the latter refers to the fast food chain McDonald's). Judging by the screenshot, it appears that the Nintendo DSi version was ported to the 3DS before any new work was actually done. (The top screen image's size indicates the app was running on 3DS hardware.)

stamp_dummy.bclim is a placeholder for the stamp icons in the Paint plugin.

This placeholder is repeated several times throughout every European language's string file, where EU_ENGLISH is replaced with the name of the language (for example, the EU_Dutch string file says "LOCALIZATION NOT NECESSARY FOR EU_DUTCH").

Some error strings present in the app's code.bin file at 0x1C4314.

Nintendo Zone has the codename Mars, according to the sound archive's filename (mars_sound_data.bcsar).