Nintendogs is a real-time pet simulation game that was released in a number of versions, mostly named for the starter breed (similarly to Pokémon). Dachshund, Lab/Shiba, and Chihuahua were the first to be released, with Best Friends and Dalmatian added later on. 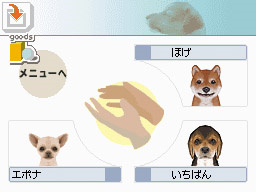 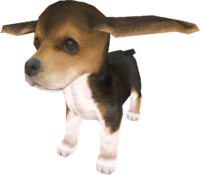 Although the game unsurprisingly features a lot of different dog breeds and variations, some didn't make the final cut. They all use the early Beagle breed files as a placeholder. 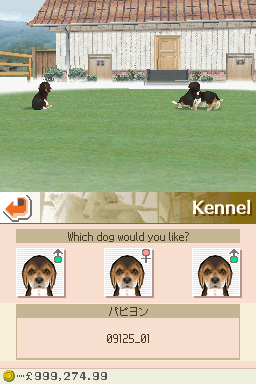 Papillon modded into the kennel.

The developers left two more toy breeds in the files, Papillon (パピヨン) and Maltese (マルチーズ). They are completely unfinished, hence they use the aforementioned placeholder files. Both breeds have data for two variants. Like in real life, they need long hair shampoo. Their file identifiers are pap and mcz, respectively and they occupy the IDs $000F and $0010. The names haven't been localized and the French and Spanish localizations leave their names blank. Furthermore, their item attributes have been removed, meaning that they cannot be unlocked in the kennel. Maltese dogs were added in Nintendogs + Cats, but Papillon dogs still remain unreleased.

Even though golden retrievers were introduced in localized releases, unfinished data for it can be found in Japanese games. Like the two unreleased breeds described above, it uses placeholder data. Interestingly, there's no file for a third variant (Glc_c).

Excluding the unused breeds, there are at least three variants available for all dog breeds. However, placeholder data for several more variants exist. There would have been one more variant for Chihuahuas (Chi_e), toy poodles (Pdl_d), and shiba inus (Sib_d), and two more variants for miniature dachshunds (Mdf_d and Mdf_e).

Attempting to play it crashes the game because the soundbank and samples for it are missing. When played in a MIDI editor, it's revealed to be an arrangement of Valkyrie’s Violation, by classical composer Wagner. It was likely intended to be used on one of the Records, considering the others play renditions of famous classical music.

An alternate rendition of the friendly dog theme without the intro, implying it was supposed to be used as a "regular theme" when meeting friendly dogs on walk.

A variation of the curious dog theme with a slightly tense intro. How it was meant to be used remains a mystery, though.

There exists some unused content specifically for agility competitions. 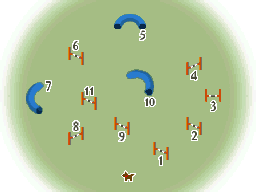 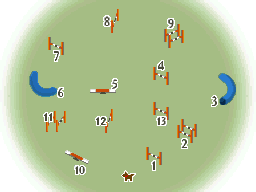 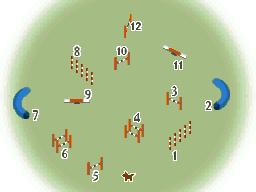 The player's dog can exercise in the local gymnasium to train for agility competitions. Here, there's no time limit or actual sequence the dog has to go through. Nevertheless, an actual sequence is configured, which is never used or seen in-game. The unused time limit for these is 99 seconds.