A bunch of unused maps can be accessed in the European versions with the following Action Replay codes. For some reason, if used at game start-up, the game uses the full party with all four members, but with young Yuri. 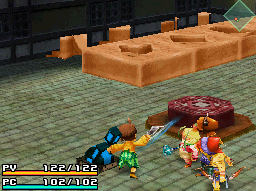 A small testing area using the graphics from the main town. It has four rectangular blocks with missing pieces. Said pieces are lying nearby but missing collision detection, and clipping partially in the wall. There is also a level which activates a button switch, that keeps resetting itself. 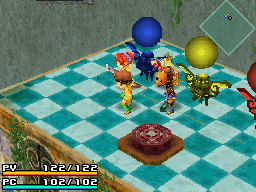 A ridiculously big area with graphics not used elsewhere. There are several platforms that are easily obstructed from view (hinting at a different camera being used at one time), and many places where you can get stuck because platforms are too high. There is a big fancy door, hinting at this map being planned as a playable one.

You start on a platform with three orbs, a button switch, with a nearby fox enemy. 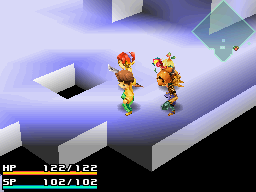 A textureless, featureless test map. There are all kinds of different platforms, accounting for the camera in the final version, with even coding to change the sound effect for walking on wet and metallic surfaces. Unlike all other maps, you can't control your three other party members, and you can even attack them. 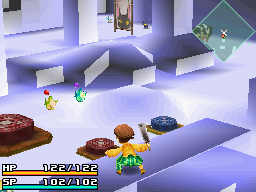 A functional version of Test Map 3, with controllable party members, minor layout alterations. Interestingly, it has some objects, such as different sized button switches. Non-interactable Moggles, various signs, and one cow are nearby, but there are also a pair of cats that will react to your presence and escape. 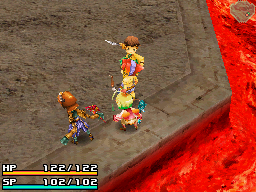 This area would likely be from Chapter 7. Unlike all other maps, you can't control your three other party members, and you can even attack them. 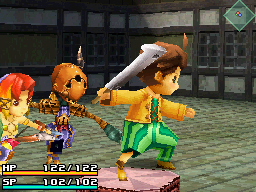 Uses the layout of Test Map 1. There is only the special platform with the 8-bit music Easter egg (which game was it from, again?). 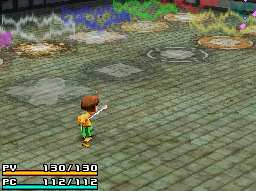 Also uses the layout of Test Map 1. There are many non-functional elemental magical barriers.

A test track, appropriately named TEST_VOICE01, is present in all versions. The Japanese voice of Chelinka says the title in a distinctly Japanese accent.

If the game detects it is a pirated copy, the game will end after 20 minutes of play with a screen saying "Thank you for playing!!".