Improving on the magic system of its predecessor, the DS version of Final Fantasy Crystal Chronicles: Echoes of Time was infamously given a direct port to the Wii, complete with dual-screen interface.

It was awkward to play, to say the least. 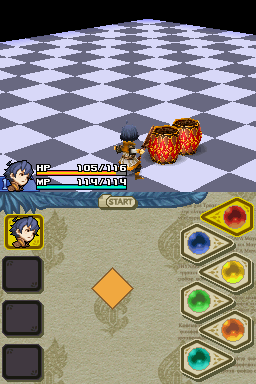 There are several test areas left in the ROM, and for the most part only the contents vary: each room is the same checkerboard square and unlike in the previous game, you can fall off the edges. The exceptions to this are the boss battles, which use their original arenas.

These maps can be accessed with the following Action Replay (DS)/Gecko (Wii) code by pressing Start + Select on DS or 1 + 2 on Wii to warp to the selected map, but use only one code at a time.

A small number of the game's 100 (!) cutscenes go unused. Some of these are dummies which take place in test map 01, described above, while others were deleted outright and crash the game. Still, a few slightly more interesting scenes remain. They can be accessed with the codes below, using Start + Select (DS)/1 + 2 (Wii).

Included in the Japanese Wii version is a Japanese-language trailer for the then-upcoming Wii sequel The Crystal Bearers, a video which is not in any of the DS versions and was disabled from viewing on the Wii releases outside Japan. That said, the video remains on the Wii disc at /movie/caster.thp and can be displayed with the following code for the US version (press 1 + 2 to play):

The same code ported to the DS version will simply display a black screen, but doesn't freeze the game.

Echoes of Time included a variety of the previous game's bosses as a bonus challenge inside the Library dungeon, with each boss fought in their Ring of Fates arenas. The original spawn points for these battles were left in this game unused—in Echoes of Time, characters spawn immediately before the bosses instead of entering via each area's door.

Most of the unused spawn points are relatively unexciting (generally spawning the player nearer the entrance) but a few show remnants of areas that otherwise wouldn't be visited. As before, press Start + Select/1 + 2 to load.

"Not Used" (and Unused) Items

There are perhaps hundreds of items of the naming scheme "Not Used #" in the game, covering each category of items and beyond into magic and attacks not usually encountered as items by the end-user. Most of these are in fact used, just not by the player, e.g. equipping a male Clavat with "Not Used 24" on the head and "Not Used 28" on the body will make him appear as the NPC, Sherlotta, "25" and "29" will make him appear as Larkeicus, etc. However, there are also at least a couple unused items of the more traditional type included in the game. 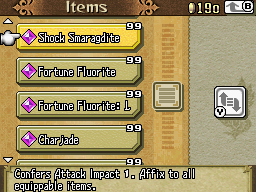 In line with similar stat-boosting jewels like Might Malachite (Arm Boost) and Hard Garnet (Body Boost), if any were actually obtainable through ordinary means, Shock Smaragdite would have provided Impact Boost. 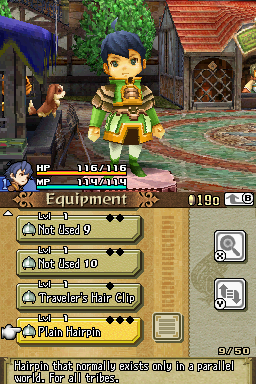 In its description, design and slots, the Plain Hairpin seems to have been intended to match with the Parallel World Garb, a body armor which becomes available on completion of Hard mode. Together, this pair of armors replicate the appearance of a character in Ring of Fates, in both hairstyle and outfit. Only half of the set is actually made available, however, leaving the Hairpin unused. In terms of stats, it has been entirely zeroed out, offering no boosts to either offense or defense. Similarly, when used for jewel crafting, the Plain Hairpin can only be turned into a Strength Stone 1, regardless of its level.

The following code replaces player one's head armor with a Plain Hairpin upon pressing Y + Select (DS)/Z + 2 (Wii). NB: The previous equipped armor will essentially cease to exist; it might be a good idea to pick up a cheap throwaway item like a Traveller's Hair Clip before using the code. The item will change immediately in the menu, but the current map must be exited to load the new model.