Final Fantasy: Mystic Quest is a side-entry in the Final Fantasy series that was marketed as a simplified RPG for beginners. It was made specifically for the US market, as evident by its later release in Japan under the name "Final Fantasy USA". As a result, it's considered something of a black sheep in the series due to Square's seemingly condescending decision to develop a deliberately dumbed-down spinoff game for Americans instead of localizing Final Fantasy V (which was released just two months later but deemed "not accessible enough to the average gamer").

Still, it's a modestly enjoyable experience on its own merits, with an excellent soundtrack by Ryuji Sasai.

Four small menu icons representing defense against earth, physical damage (including player axes, but not swords or claws), indirect attacks (including Phoebe's bow and Tristam's shurikens), and reverse drain. Reverse drain does nothing on its own, but if paired with drain protection it will cause the damage and healing dealt by drain-elemental attacks to be reversed.

Resistances against the attack types themselves exist and are used, but only for enemies - no items, not even the unique ones equipped by allies, offer any protection against these four damage types. Furthermore, while enemies can have a weakness to explosives, it appears to be unaccounted for in these elements - if a confused hero attacks himself with a bomb, he won't resist it even with all eight active.

Below the Dark King entry 0x146E3-0x146FE and just before the attack data, there are two additional entries for enemies. Given their identical (and unusual) stats and being unable to find them anywhere within the game engine, they appear to be unused.

One of the eight status ailments in the game, Silence is attempted to be inflicted by a couple of attacks, such as the Mage's Muffle. Regardless of resistance or lack thereof, it never seems to get set.

Nevertheless, the status does exist, complete with accompanying effects. 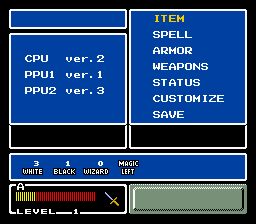 Pause the game, then press Start + Select to display the versions of your SNES console's CPU, PPU1, and PPU2 chips. This only works on the first US release, though, and was removed from the Rev. A version and the Japanese release.

In addition to the above, the first US release also contains a sound processor bug that can cause a major freeze in any area that, ironically, plays the frozen-over Falls Basin music. Said music also plays in the Mine and the Spencer's Place waterfall.

Since the game can be saved at any point, this is only a minor annoyance.

The Japanese and European versions removed "Final Fantasy" from the title screen.