Final Fantasy IX is the ninth Final Fantasy game, completing the "trilogy" of PlayStation Final Fantasy titles. For better or worse, depending on how one views it, this entry returned to the series' original "fantasy" roots, after the seventh and eighth games featured a more modern/sci-fi angle.

Cinna has a face portrait as well as a victory pose. However, the player will never actually see these in-game, due to the fact that he's in the team only for a very short time, and during this period, the player cannot access the menu. Plus, none of the battles that he's in are ended properly - they fade to black.

There is an animated pre-rendered background for one of the hallways of Lindblum Castle. It features the stairs moving in an escalator fashion.

Some of the enemy textures contain a hidden drawing. 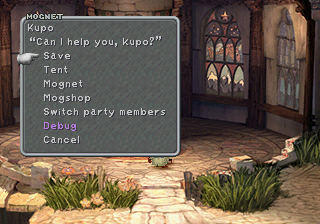 The moogle dialogue menu has some extra entries removed by the script when the dialog is opened. The unfiltered menu (ie. the menu before the script is run) shows a debug entry, but selecting it doesn't do anything.

In disc 3 when you return to Alexandria, there was originally going to be a Balloon-related mini-game that was played with a group of three girls holding balloons near the ticket stand from the beginning of the game. In this mini-game, find the balloon girls on the screen you're in, take their balloons and bring them back to the little boy standing where the mini-game started.

This entire mini-game still exists in the game data, and can be hacked in.

Girl “You want to play with us?”
Girl “You've got some time to gather balloons and give them to the boys behind us!”
Girl “You get more time depending on the color of the balloon that you bring.”
Green → 5 more seconds
Yellow → 10 more seconds
Blue → 15 more seconds
Red → 30 more seconds
Girl “All the three of us have a balloon and we are somewhere on the square.”
Girl “Well... Start!”
Boy “X more seconds! You have Y points!”

There are a handful of dialogues and/or scenes that are suppressed within the game. They don't contain any bugs and work seamlessly with the rest of the game.

A patch was released for the game that enables these missing dialogues.

The removed scenes that were re-added in the patch are: 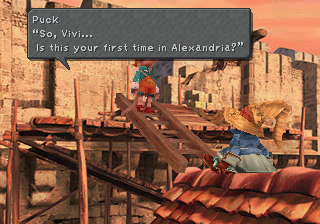 Disc 1, In Alexandria, when Puck and Vivi are making their way over the roofs to see the play, the following dialogue, only text, existed: 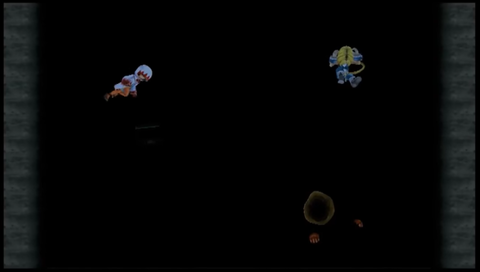 Disc 1, In the Ruined Prima Vista, Zidane can chose to "Forget it" about searching for the Princess. Then the following scene happens:

Disc 1, In the Ruined Prima Vista, there is an ATE called "Steiner's bitterness":

Disc 1, in the Observatory Mountain near Dali when Steiner first enters it, there is extra text between Steiner and Morrid:

Steiner “Alexandria, off course! Burmecia started the war, and we lost our king as a result.”
Morrid “Many wars were fought before the Lindblum Airship Revolution.”
Morrid “Alexandria intiated some of the wars against Burmecia. Now, can you tell me who was right or wrong?”
Steiner “I-I am not talking about the past! I am talking about the future!”
Morrid “What will you do if Alexandria starts a war?”
Steiner “When will the cargo ship arrive!?”

Disc 1, in Gizamaluke's Grotto, there is extra text if you enter before Burmecia is attacked: 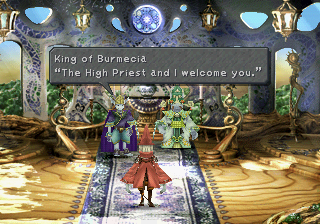 Disc 1, in Cleyra, there is an extra ATE when you enter the cathedral, called "The Treetop Town of Cleyra":

Freya “It has been some time, Your Majesty.”
King of Burmecia “Ah, Freya, well met.”
King of Burmecia “The High Priest and I welcome you.”
High Priest of Cleyra “My Lady.”
High Priest of Cleyra “It would appear that this predicament no longer concerns Burmecia alone.”
Freya “I understand, Your Holiness.”
Freya “And yet...”
Freya “I fear my strength alone may not suffice.”
King “Freya...I know what troubles you.”
King “I must apologize for earlier.”
King “Can you ever forgive me?”
King “No! off course you cannot.”
King “But the fate of the people of Burmecia now hangs by but a thread.” 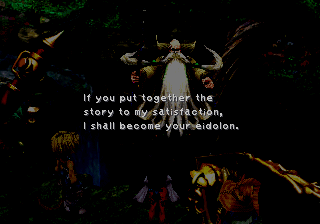 Disc 2, Pinnacle Rocks, just before starting Ramuh's Quest, he was originally meant to give you more information:

Ramuh "...Many years have passed since I last served a Master..."
Ramuh "I must test to see whether you are truly fit to be my master."
<screen fades, text overlaid on the darkened image>
I will hide 5 manifestations of myself in this forest.
Eacho one will carry a piece of the 'Hero's Story.'
Collect all 5 pieces and tell me the story.
If you put together the story to my satisfaction, I shall become your eidolon.
<Ramuh disappears, screen goes back to normal colours>
Dagger "I'm sorry. I know we must hurry..."
Zidane "It's okay, Dagger."
Zidane "After the Festival of the Hunt, we went to Burmecia, and then to Cleyra."
Zidane "We saw the summon magic destroy Cleyra... There was nothing we could have done..."
Zidane "So if there's a way to counter that magic, I also want to know it."
Vivi "I'll help you, too"
Dagger "I Understand..."[sic]
Dagger "Thanks, you two."

Disc 2, in the Occupied Lindblum Castle, there is a section where Zidane enters the castle with one of Cid's men, and avoids an Alexandrian soldier:

This possibly would have led into a stealth section, like the Hedgehog Pie section from Disc 3.

Disc 2, in Occupied Lindblum Castle, when Cid gives you the world map:

The Iifa Tree could not be stopped...
Gaia and Terra's fusion
caused global chaos,
destroying many cities and
taking many lives...