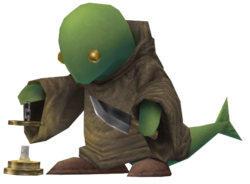 There is an Aerith 3D model and Tonberry 3D model in the game that are never used. Aerith may have been considered as an assist character, considering her appearance in Dissidia 012 Final Fantasy. 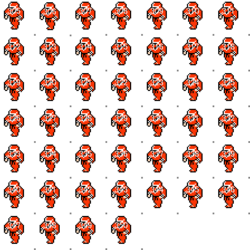 There are 46 placeholder graphics for Player Icons. They appear as a FF1 Ninja and are numbered. 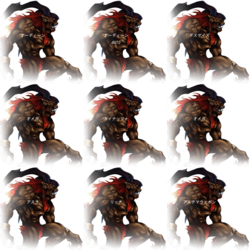 Since Cosmos and Chaos are not playable characters there are several placeholder graphics for Cosmos and a few for Chaos. Most of them appear as a faded out Zidane.

Normally it isn't possible to play as Chaos, but with cheat codes it is possible.

There is an enormous amount of differences when comparing the Japanese and international versions.

These changes were later brought to Japanese gamers in the Universal Tuning re-release, which further adds the ability to change the battle voices to either English or Japanese (cutscene voices are only in English).

In the original Japanese version, the EX Bar would stay purple, regardless of the EX status. In the international versions, the EX Bar turns orange when full, and remains so in EX Mode.

Battlegen was called Battle Rise in the original Japanese version.

New Item in the PP Catalog

The PP Catalog in the international versions now has a new item that can unlock all cutscenes in the game.

Arcade mode was new to the international versions. All Cosmos characters are available from the start, with villains, Gabranth and Shantotto unlockable through the PP Menu.

Shantotto's and Gabranth's cutscenes in the Distant Glory storylines were originally told by dialog boxes. In the international versions, it's been changed to fully voiced cutscenes instead.

A new cutscene involving the Moogle summon and Terra has been added as well. This is the same cutscene seen if you get the Moogle Summon in Duodecim.

The international versions feature a new tutorial that plays before the Prologue story, giving a short introduction to the battle system.

Round Edge and Charge Lance have changed graphics.

Time Crush has been nerfed, so it can not be used repeatedly. If you use it again, and the enemy is already frozen, they will unfreeze instead.