This page details one or more prototype versions of Final Fantasy X.

A prototype of Final Fantasy X was leaked to the Internet circa 2008. It is a prototype of the English translation with debug features enabled. 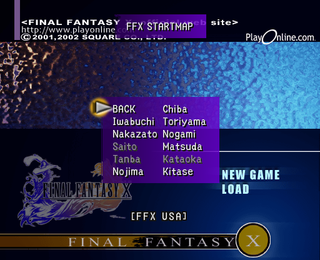 Contains the main meat of the debug rooms, and is more like previous debug rooms in FF games where each programmer gets one.

Teleports you to near the shoopuf rental thing in the Moonflow. Kinoc is there, shooting an air rifle. You can push him around but you can't actually talk to him. There's also a Save Sphere there. Press Square to bring a menu up.

This map plays a cutscene that, well... needs to be seen to be believed. You can skip it and go straight to the menu by pressing X. He also begs your pardon for a mistranslation in this page. All is forgiven. 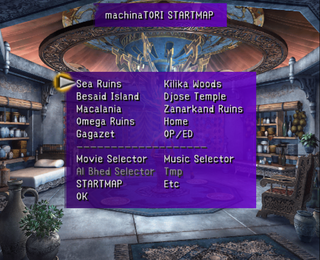 "machinaTORI STARTMAP" Warps you to various places in the story. All pretty much self-explanatory, except for Tmp, which gives you this screen: 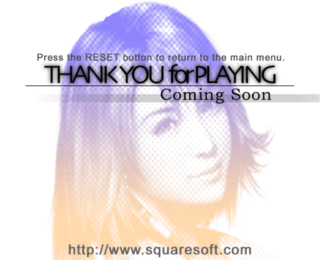 This screen is from the demo version of Final Fantasy X included in 53th Demo Compilation from the Official US PlayStation 2 Magazine. Choosing OK will let you walk around the room, but otherwise not much you can do here.

More like a debug room in the past FF games, you'll be hanging around a bunch of NPCs that warp you to different places.

"Stand back." Handles stuff in Zanarkand.

Classic debug room, contains a bunch of NPCs that do stuff/warp you to places.
You start facing an NPC that always changes, Yuna to the left and Kimahri to the right. Going down reveals more NPCs.
If you use one of the Luca options and then press Square, you'll have debug options within Luca. These actually work on retail if you load a save!

Press Square to test screen-wide effects. Press X to cycle through them.
Press X for the real options.
"Where?"

plus the Japanese (?) version of Tidus humming it. The movie spheres include the two ending FMVs + the short clip played when the airship re-enters Sin (which is cut from another FMV).

Right-Most Character (will clone whoever is the player character is)

Functions as a motion test for whoever is the player character, but only Tidus seems to have motions at all and goes through them too fast?

Tests O'aka related events? All the options have garbled text since the Japanese character set is gone.

which makes it a piece of lore never revealed in the actual game! 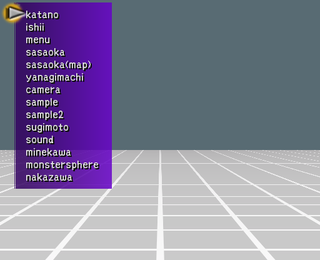 Only 'menu' and 'nakazawa' work. Entering this room strips the party to just Tidus. 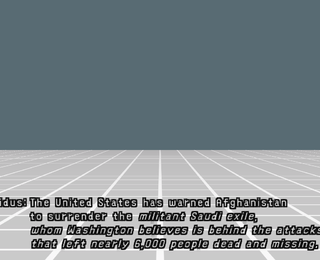 You can push the Cactuar around! Talk to it to open up a menu.

Gives you a list of places, and a menu to input a number, much like the one in the FF8 debug room. Most are self-explanatory, so the only ones documented here for now are unusual ones. Also, you can make characters fight underwater that weren't supposed to: their battle model will be just doing a T-Pose since they have no underwater animations, including Seymour.

test11 has its own set of battles.

After these are some other commands.