Final Fantasy XIV Online: A Realm Reborn is the third Final Fantasy MMO, the first being Final Fantasy XI. It's notable for both the substantial amount of support and expansion packs it received for over 8 years, and especially for being one of the most played MMOs of...all time, actually! Square Enix hit it out of the ballpark with this one.

Due to the heavy criticism of Final Fantasy XIV Online, the game was remade as a completely new game by a team headed by Dragon Quest X director Naoki Yoshida and subtitled A Realm Reborn. The game's first expansion, Heavensward, was released in June 2015.

While it is well-known that much of the original game went through drastic changes for its re-release, it is not common knowledge that many features, including additional Disciplines and monsters, were found in the 1.0 client via data mining. Skills that were meant to be learned all the way up to a level cap of 99 were present in the data files, and in particular, a Reraise spell meant to be learned by Conjurers at level 36, though this went unused. In terms of Disciplines, both Arcanists and "Musketeers" were present in the game's files since the beta of 1.0. Arcanists were originally intended to use a sort of mechanical staff and fight in part via placing "magical traps"; Musketeers appeared intended as a second ranged-physical class.

It's worth noting that signs, symbols, models for guns, and even animations for the Musketeer class can be found all over Limsa Lominsa in A Realm Reborn. The Marauder's Guild not only has a sign with two crossed flintlocks (that also appears in the free company crest editor), but two Miqo'te women being trained in the basement on how to use a musket.

A class referred to as 'Adventurer' in English and 'すっぴん士' in Japanese is referenced in classjob.exh at the top of the list with an ID of 0. Interestingly, it has a unique acronym for each language besides Japanese, which is left blank.

This is the class that the player is assigned during the opening cutscene(s), before they start the game.

Text tables for Free Companies seem to hint towards a "Guest" and "Recruit" rank, and a Free Company chest that is more ordered, with labels such as Items, Gear, Medicines & Miscellany.

In the current game, the Guest and Recruit ranks do not exist, only showing Member, Officer and Master by default, and the company chest merely consists of five tabs (two of which must be unlocked), with no labels assigned or that can be assigned.

There's a few lines in the game that go unused - presumably for certain class quests.

These seem to fit best in the Rogue's Guild; this is however merely a guess:

Cor! I haven't got this worked up since I had a go on yer mam!

Ahoy! It's all kickin 'off now!

Where as these are most likely spoke by a Lalafell:

Ooh! How did we get into this mess?

Master! I cannot do this alone!

The throwing weapons are a leftover from the ill-fated 1.0 version of the game, and thus go completely unused even by NPCs. However, the gun models here are not used by the Machinist class, the hand gun wielding class added in the game's first expansion, Heavensward. While they are used in animations by several NPCs, including Cid nan Garlond & Milala, they are completely unobtainable by normal means.

None of these items have item IDs, making them unobtainable without client side editing - to which the game also has no animations in place for them.

All quest items are classified internally as Pugilist Arms; obviously, they can't be equipped by a Pugilist. Quest items include items needed for battlecraft leves and the object of desire for some fetch quests. They are found in eventitem.exh.

Interestingly, plural forms for items you can't obtain more than one of exist in the game's data; this may just be for consistency.

There are a set of dyes which are rare or only available on the Mog Station cash store - however, two of them go unused and/or have yet to be released legitimately. These were found in stains0.ehx, and do not appear to have items tied to them - though they work perfectly fine when applied to items. These dyes were added into the Mog Station and received as possible loot from the retainers as of the Stormblood 4.1 patch.

The Judge's set of items are equipable armour only available to a Game Master (or "GM").

As the stats indicate, the armor is only for show and gives no benefits compared to armor past level 10. The bread and butter of the set is the Judge's Haubergeon, which gives the wielder a shadow aura. All Game Masters are likely given this set of armor to make their avatar unique and easily recognizable to regular players.

Notably, one of the Judge's sets is a version of the Bard artifact armor. This is worn by Naoki Yoshida, should he and his character appear in the game for any event. Yoshida's own character often appears in the game in a similar outfit, and is known as the Wandering Minstrel. It's also worth noting that trying on the gear on any female character or a Roegadyn male makes the gear show up invisible; despite the gear model existing for them, Yoshida's variant uses special textures intended only for Hyur men.

As with any MMO currently out there, Final Fantasy 14 has expansions that add new items, some of those items go unused. These are listed before.

Acting textbook: Love Tomestone - Acting textbook written by a choreographer [Acquire a specific emote when used]. This is the rough translation of the book that, when used, gives the player a emote.

Players are sent to Mordion Gaol by a Game Master if they have to urgently speak to a player. This typically happens if they violate the Terms of Service or Rules of Conduct. It consists of a single empty jail cell complete with torches on the wall which provide light. It is impossible to enter Mordion Gaol without Game Master assistance, and it is impossible to exit it without help from a Game Master as well, as every type of teleport is disabled while confined. For serious offenses, players may sometimes be left unattended in the cell, unable to play the game normally.

The Kedtrap and Sabotender textures have notes scribbled in between the actual texture; naturally, these are not visible on the models. 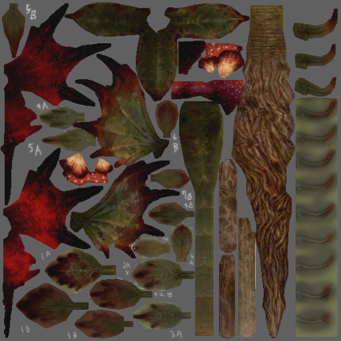 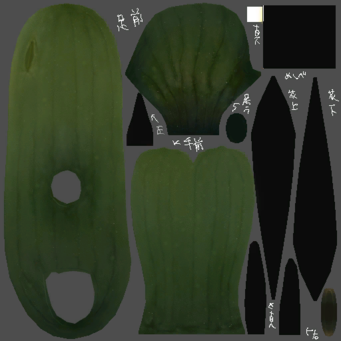 There are also countless test and placeholder textures left in the files.

Quest markers for "lore" quests are among the UI elements, but as of Patch 2.57, still go unused.

This weird 8-second song made up of beeps appears as a filler in the game's files several times. As of Patch 4.2, it appears to be filling in spots for Moonfire Faire (Obon Festival), Little Ladies' Day (Hina Matsuri) and a fifth Alexander track.

This theme for Cid nan Garlond -- Dreams Aloft on the soundtrack -- is found as bgm_system_launcher.scd. However, the launcher on PlayStation 4 instead uses the XIV version of the classic Final Fantasy prelude.

As with any other MMO currently out on the market, Final Fantasy XIV has been updated over the past six years and content has been changed or removed due to numerous reasons.

Certain items that had crafting recipes in 1.0 no longer have either recipes to go with these older items or monsters no longer have these items in their drop table. The items are still in players' inventory and most of the items can be sold to NPCs and on the market as well. Any item that had a +1 to +3 quality had their quality changed to high-quality (+1). This is the case with older equipment as well. Most equipment that was not unique had the prefix of dated added to them and their stats weakened. However, as of the latest expansion Endwalker, high quality gathering items are no longer attainable.

Artifact armor had their special abilities removed in A Realm Reborn since the developers wanted to get away from having to keep special abilities on gear going forward. They were once found in the dungeons The Aurum Vale, Cutter's Cry, and Dzemael Darkhold. In 1.0 these were 8-man dungeons at level 45 and above. However in the transition from 1.0 to A Realm Reborn these dungeons were designed for 4 players and mechanics were changed because of it.

The Main Story Questline of A Realm Reborn has been streamlined in Patch 5.3 for its quests and so certain quests have either been removed from the game or condenced into other quests and their dialogue changed as a result. Some of the lore that was found in these quests were added to side quests.

The Grand Company Quest "Twisted Beliefs" was removed on October 15, 2013, during a hotfix update. The original quest required you to go speak with an NPC outside of the gates to the dungeon Amdapor Keep. However, this was removed and the quest Gilding the Bilious was added instead. This was due to people not wanting to go into the level 47 dungeon The Aurum Vale.

The Hevansward quest "I Believe I Can Fly" has been removed in patch 5.3 and the ability to fly has been moved to the end of 2.0. The hat that you would get from completing the quest is now handed out at the achievement NPC in Old Gridania.

Even though expansion sees each job and class changes and rebalancing, causing skills to either be reworked, removed, or otherwise just renamed. However NPCs have access to these skills still.

Final Fantasy XIV has separate clients in both China and Korea. The Chinese client is ran by Shanda Games, who operate MapleStory & Ragnarok II in China, whereas the Korean one is ran by Nexon, who runs the MMOs Mabinogi & Blade and Soul.

The Chinese version of the game is a separate client. Players pay per time played, rather than a monthly fee; this is very similar to the method of paying for the popular MMORPG World of Warcraft. It is likely that the upcoming Korean release will also follow this model as well. Game patches in China are also delayed; currently sitting at Patch 3.15.

Unlike the regional servers, wherein a Japanese player can join an English server and vice-versa, only those with the Chinese client can access the Chinese server. That being said, there is a reference to a Simplified Chinese language option in the worldwide client; however, it's ultimately unselectable as there is no Chinese text translated at all.

During the 2015 Chinese New Year, Chinese servers hosted an exclusive Lunar New Year event. Among the festivites was a boss fight with a Xi creature, and a collectible baby panda minion. The baby panda was added to the international game in Patch 3.3 as a purchasable minion.