The lost third game in the Final Fantasy series finally comes to America and Europe, complete with newly redesigned and rebalanced jobs, a questionable level curve and unique identities and personalities for the protagonists (90% of the scenes featuring said personalities being cut)!

Within the files for the Tower of Owen is room d07_12, a room containing a bed and some furniture. This room did not exist in the original game and it cannot be entered here.

Interestingly, some unused dialogue is linked to this room, suggesting that it is Desch's room.

This is used by Desch while he is in your party. The sword has an attack power of 20. This cannot be obtained by any normal means without cheating/hacking. You also cannot equip this sword on any character no matter what job class you choose without using cheats/hacks, this weapon can however be thrown by the Ninja job class.

The sword is spelled this way in the code, this was part of the Adamant equipment line throughout the Final Fantasy series. The sword is a fire-elemental melee weapon with an attack power of 138 and grants +20 Strength. This cannot be obtained by any normal means without cheating/hacking. You also cannot equip this sword on any character no matter what job class you choose without using cheats/hacks, this weapon can however be thrown by the Ninja job class. 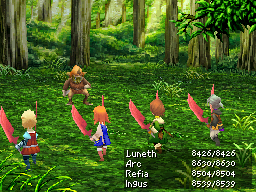 This is a scrapped fist weapon in the game. It is actually the most powerful fist weapon with a whopping attack power of 140, it also gives +20 Agility. This was designed for the Black Belt job class as a mastery weapon. This cannot be obtained by any normal means without cheating/hacking, you can however equip it like a normal weapon without issues. 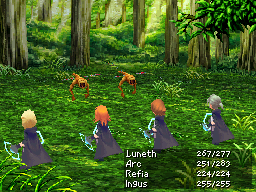 Normally used with the Geomancer's Terrain command. Level 8. Cannot be used by any class (probably for the best, as this would break the game if it could be used at will). Uses the bell icon in the item menu and the "dead" status icon in the magic menu (for some reason), and has a description: "Deals non-elemental damage." 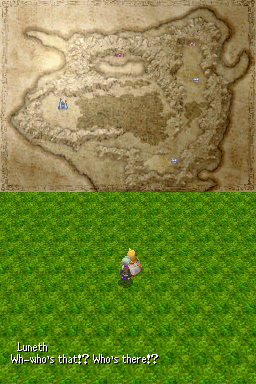 To be perhaps one of the most uninteresting debug rooms in all of Final Fantasy, a fairly simple debug room exists in the game under the name debug01. Unei stands as the sole NPC in the room, talking to her will cause the screen to flash, then display text.

There are some obvious differences of the title screen for each regional version. The release years make that a bit obvious, even so the Japanese version has the title of the game in Japanese right under the English title.

There are no differences between the USA and European versions of the game while in a battle. The Japanese version however uses a different font when you look at the HP of each character, although it's quite common for the Japanese versions of games to have this difference, as alphabetical and numerical characters tend to use full-width fonts in Japan and get changed to shorter variable-width fonts in the overseas release.