From The Cutting Room Floor
Jump to navigation Jump to search
This page contains changes which are not marked for translation.
Other languages:
English • ‎italiano • ‎日本語 • ‎한국어

The final fantasy. Shortly after releasing this, Square failed and was never heard from again. 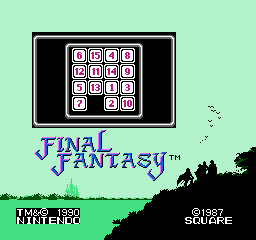 While on the ship, you can press A and B 55 times to unlock a sliding puzzle game. Completing it awards the player's party with 100G.

The end of the main script of the American version contains some leftovers from earlier versions of the script, starting at 0x2B496:

For most of this text, the newline character is 01 (as in the Japanese version) instead of 05 (as in the rest of the American script).

This rather regal-looking fellow, shown here using the Fighter's overworld palette, can be found sandwiched between the witch and soldier NPC sprites in the overworld sprite bank. He has a full set of sprites for facing and walking in all four directions, but he's never used anywhere in the game. The most logical role for him would be as the Prince of the Elves, but he doesn't have pointed ears…

This pub sign exists in the town graphics of both versions, but isn't referenced anywhere in the tileset, and no other signs in the final town tileset use 16x8. The sequel did feature pubs, but used a full 16x16 tile sign.

This little dude is found alongside the graphics for the orbs in the main menu. It's shown here using the message window palette.

Also found alongside the orbs are this shield(?) and star icon.

The routine at 0x3CFCB, run during transitions to maps other than the world map, takes the checksum of the "PROGRAMMED BY NASIR" text from the intro (0x37B1A-0x37B34). If it's been altered, the game pulls the top three values off the stack and executes an RTS, setting the program counter to some arbitrary value and effectively crashing the game. A similar protection and method of deliberately crashing is used in Dr. Mario. 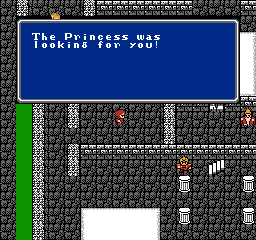 Going to this spot in Coneria Castle will reveal a message, which changes after the player obtains the Lute. This NPC mistakenly has the "in room" flag set, but was not placed in a room, meaning that her sprite (a typical female townsperson sprite) never shows up. This error also appears in the Japanese release. Interestingly enough, this glitch was fixed for the MSX2 version that predates the North American NES release. Rather than fixing her room flag, she was completely removed from later remakes.

The US version changed a few minor issues with the original game. Most (if not all) of these changes are also in the late Famicom compilation Final Fantasy I-II and subsequent remakes.

The graphics on the title screen was adjusted so that the Nintendo copyright information could be added. The sloppy adjustment resulted in palette artifacts from the title logo (pink and blue pixels) in the grass and tree. In addition, the copyright symbol was altered and the title logo received a trademark. For some inexplicable reason, all text boxes were reduced in height, leaving a thick black border at the top.

The columns on the final floor of the final dungeon forms a hexagram, which became a triangle in the North American version. Additionally, random encounters were removed from this floor to give the player some breathing room for the final boss, as an enemy encounter could literally occur during the character's speech.

While the Japanese version had churches, the US version had clinics due to Nintendo's policies on religious imagery. This change was made on the CHR level, and so the cross graphics are not present at all in the US version. The new heart sign was likely intended to use the same palette index as the other signs, but the palette assignment for its map tile was never changed.

Interestingly, the cross does not appear on the roof of the building in most remakes, though the steeple did.

This change extended inside the church/clinic as well.

These three tilesets all had either crosses or Stars of David replaced with different imagery.

Medusa's sprite was slightly altered to give her a top. This change extends to the Green (Earth) Medusas.

The EYE, known as the Beholder in the Japanese version, was completely redrawn to avoid copyright issues with TSR, the then-owners of Dungeons and Dragons (and, by extension, the beholder). This change extends to the Death Beholder/Phantom. All remakes of the game, including the Japanese versions, use the Eye's design.

The Fighter and White Mage's weak frames were touched up slightly.

The Ninja's victory/casting animation was changed so that his legs don't move.

Supermonk, as he was known in Japan, tamed his hair and grew a mullet in time for his US debut as The Master.

The Red Wizard's cape was touched up a bit, particularly his walking frame where the bottom of it originally disappeared entirely.

The White Wizard's head was moved a pixel to the right and the left hand was moved up a pixel.

Several of the sword graphics were touched up slightly.

Most items were given icons as a part of their name to better distinguish what they are. This was done because there usually wasn't enough space to include the full item name in English. Interestingly, unlike future Final Fantasy titles, the icons are drawn at the end of the item name rather than before it.

The title of the weapon and armor menus are a beige shade in the Japanese version, and the currently selected option is highlighted in red. While this is technically still the case in the US version, the palettes have been set to white, making them indistinguishable from the standard text palette. This was likely done because the translators were unwilling or unable to resize the windows to account for the attribute table changes required to accommodate the longer English text strings.

Some battle formations were altered for America to fix a small, relatively obscure glitch in which enemies will occasionally display corrupted colors, though this can still happen to Sea Trolls.

When you activate the time gate in the Temple of Chaos, the "got key item" fanfare is heard in the Japanese version. For some reason the regular "item found" noise is heard in the North American version instead.

The Virtual Console release of the game tones down the bright flashing colors for certain spell animations, and for when initiating and exiting a battle, due to such graphics potentially causing epileptic seizures.