There are a pair of spells intended for Selphie's "Slot" Limit command that weren't used. Both can be obtained as normal spells with a GameShark (as can the four that are used), and work as advertised, though they weren't given unique animations, and look identical to the Fire spell. No "Slot" spells can be junctioned, however.

The Apocalypse spell itself isn't unused at all; Ultimecia can cast it in the very last battle, and it can be drawn from her and even stocked. However, one aspect of it isn't available normally: This spell can be junctioned as normal, and has a full set of stat boosts, as follows.

(Note: All increases assume 100 of the spell are junctioned to the respective stat.)

These boosts tend to be, by and large, second only to those granted by Ultima. It's a shame that there's no way to junction this spell normally.

Famously, the Final Fantasy 8 demo bundled with Brave Fencer Musashi featured a completely different song for the Dollet attack mission than what was used in the final version. This song is still present in the final version, but is never used, and can only be heard in the debug room. A widespread theory is that it was removed for legal reasons due to heavy similarities with the song "Hummel Gets the Rockets," composed by Hans Zimmer from the movie The Rock released in 1996. 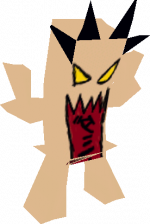 Dummy is a test enemy who can only be fought in the debug room or through other cheats. He has 410 HP regardless of level. His chest (mouth) has the katakana text 'dummy', mirrored. He also has "ゴメンネ"(I'm sorry, gomenne) written on his back. 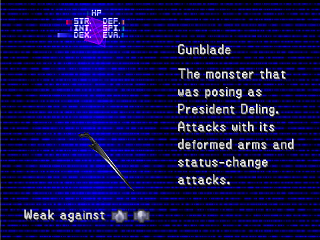 Again via the debug room, you can fight a gunblade. It appears in place of GeroGero after defeating the Fake President in the Battle scene test number 2380. This enemy is not actually unused, and is present and visible in all battles against Seifer Almasy. Because Seifer uses a player model, his weapon, the gunblade, is a separate model but is just made untargetable.

The texture sheets for some monsters have little bits of text and drawings occupying the blank spaces. 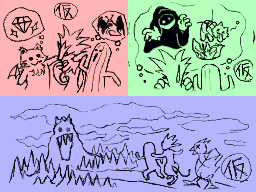 Alongside the images used in the Chocobo World introduction are these concept drawings. The kanji visible in each picture means "temporary". 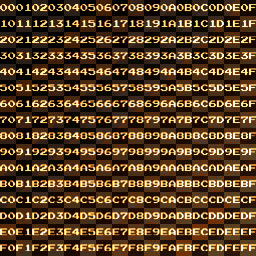 This grid of hex numbers is unused in the normal game. It does appear though as the floor to battle number 4670 in the Girls Debug Room battle scene test. 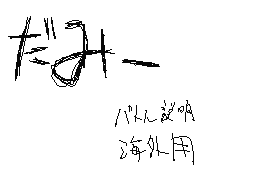 To try and visit the areas listed, use the following GameShark codes replacing xxxx with the listed code. Then press all four shoulder buttons during gameplay to activate. 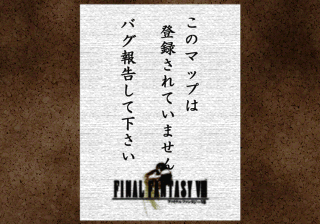 0048 — Grouped with the debug rooms is this, named testno. It exists in non-JP versions though the text associated with it was not translated. The text seen in this image translates to "This map can not be entered. Please report this bug." Trying to enter it crashes the game. 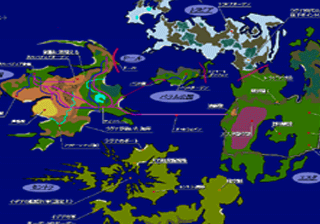 004C — Another one grouped with the debug rooms. It's named test6 in the game's files though hidden text in it and the main debug room identify it as Kitase-san's page. Its text has been translated though it also crashes trying to enter it.

00D8 — A bizarre scene in the training centre. Accessible only on Disc 4, the game will crash if you press any buttons other than D-Pad Right, action, or party menu. The bat like black shape in the middle is a rotated Squall sprite and the blobs moving left and right are the relief features (trees, walls) on a scrolling copy of a grayscale version of the background. 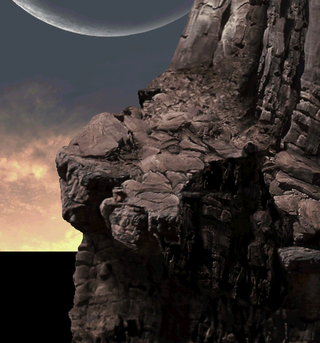 0149 — This rocky outcrop is where a forced battle against the XATM-092 takes place in the demo, but it is unused in the actual game. Its description in the game's files is Timber - TV Screen, and the only text associated with it are the Japanese for 'Test' and 'Battle Battle'.

0283 — A car with an animated background. It's labelled as Winhill - Car and the scene only exists on Disc 2.

02A0 — Overhead shot of some Winhill backstreets only visitable on Disc 2. The room has scripts for Laguna, Kiros & Ward, but only text is "Test". When playing, the above car is visible through the houses. 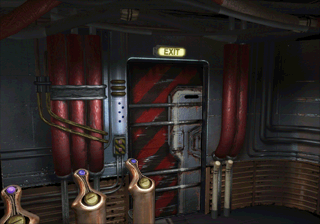 0326 — The back of the arm control room in the D-District prison. There is no associated text or description so this is very much 'what you see is what you get'. 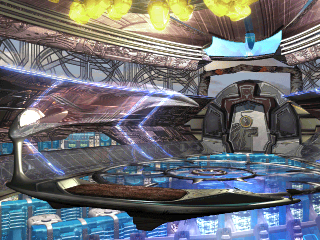 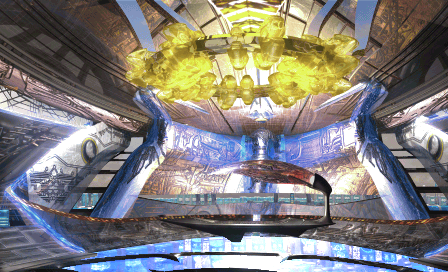 021A — Esthar's presidental palace with a normal sky and blue lighting and an alternate state showing the back of the room as well. In the actual game it is replaced with room 021B, which is identical save for a red sky and purple lights. Its only associated text is untranslated Japanese for 'Test'. It is described as Edea's House - Flower Field and is only visitable on Disc 3. 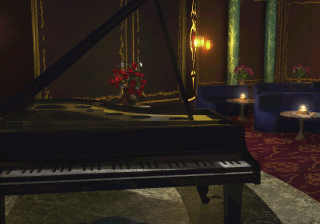 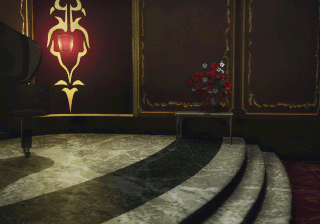 02CE — Alternate viewpoints for the initial Laguna-Julia cutscene. The game eschews these and the untranslated Japanese text contained within for the angles in room 02CF. 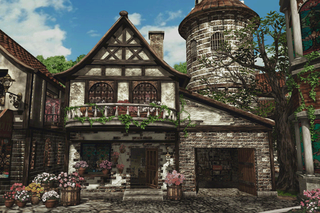 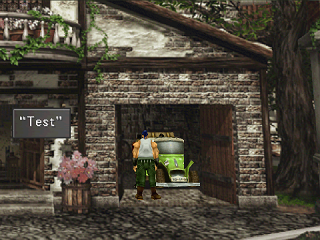 029F — An enlarged shot of Raine's house in Winhill. When playing, the car above is visible through the closed garage doors. Entering and actioning the car displays the "Test" dialog box. Disc 2 only.

Build dates can be found in the FF8DISC*.img archives:

Next to the build dates are strings indicative of a debug menu/overlay:

There is a unique feature which allows the player to download a mini-RPG called Chocobo World to the PocketStation. This allowed the player to collect items and power-up certain Guardian Forces. Although the game was localized, the PocketStation itself was not released outside of Japan, thus making the mini-game inaccessible without importing a PocketStation. This is available in both the Steam re-release of the game and the 2013 re-release of the 2000 PC version.

Oddly enough, the American release's manual has an entire section on Chocobo World! However, it begins with the text:

(*NOTE: Chocobo World requires the PocketStation™ personal game unit, which may not be available for purchase outside Japan.)

Some gameplay changes were made when the game was localized:

Some censorship was also made when the game was localized:

Hardly a localization change, but the Italian translation differs from its PAL peers in that it got an actual Scan message for the Dummy enemy, and it's nothing less than a note of frustration sneaked in by the translator himself! He apparently knew it wasn't going to show up.