This is a sub-page of Final Fantasy VIII. 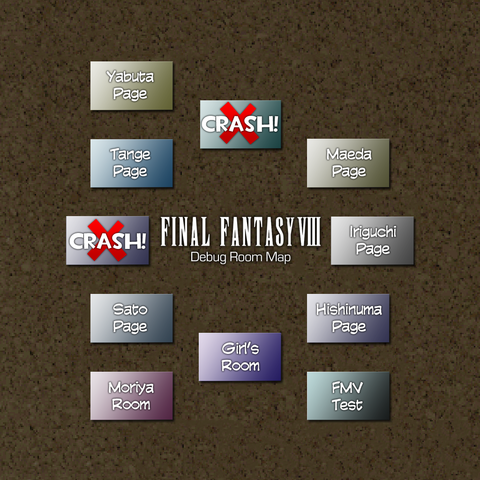 A handy map for navigational purposes. Yabuta, Iriguchi and Moriya's pages will crash in the JP version!

As in FF7, there is a very detailed debug room in FF8.

To enter it, enter the following codes into your GameShark:

NTSC-J: (WARNING! Some debug rooms WILL crash! These will be noted.)

All translations in this page courtesy of GlitterBerri. 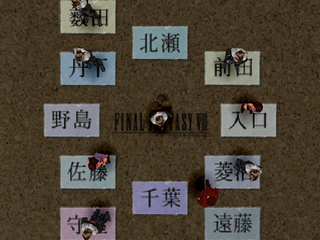 This is the first area of the Debug Room, and it primarily acts as a means to access the other rooms. There is, however, one NPC here.

This cheery fellow acts as your main menu for debuggery. Think Yuffie, but without the pyramids. 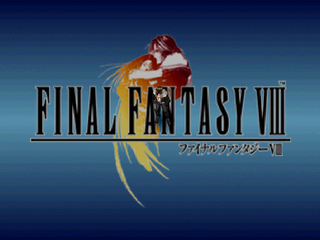 Will crash in the NTSC-J version! There is nothing in here. I don't mean that figuratively, I mean there is actually nothing in here. Squall can wander around the background a bunch, but he's not going to find anything.

Tatsuya Yabuta was one of the map planners and an FMV contractor co-ordinator, by the way. 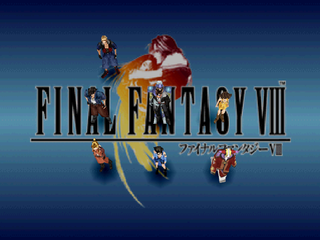 Upon entering this room, you'll be told that if you want to go to Esthar, you should use the PMS of the soldier in the middle, then talk to the person on the bottom right.

Kyoko Tange was one of the event planners, if you were wondering.

This jerk deals with the Esthar Laboratory events. Apart from the first one, these options require you to be playing on disc 3:

The Man With The Machinegun! He deals with a couple of Laguna/Julia events.

Music test! All of her options change the current music.

Rinoa deals with disc 3 stuff (except where noted).

This guy deals with Esthar! And more Disc 3 only-ness! Yes! 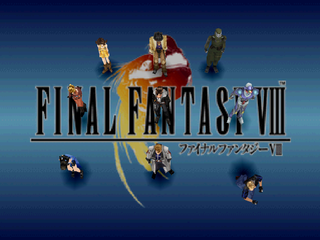 A bit of everything in here. Controller vibration tests, sound effects tests, party creation, and some teleporting too.

The name probably refers to Akihiko Maeda, who was an event planner.

Your guide to early game Balamb and the disc 2 Ironclad battle. Note, after selecting the first three options the game will crash trying to play the "boats arrive in Dollet" FMV if you're not playing on Disc 1

Your guide to miscellaneous party and game things

Your guide to Balamb Garden

Your guide to controller vibration tests.

Your guide to disc 3 Esthar stuff

Your guide to a 3 person party. All you get is the party select screen

Your guide to music and sounds 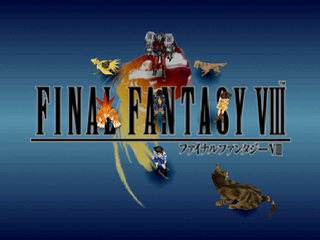 Animal house comes to Final Fantasy! There's an invisible save point to the far left of Rinoa. Will crash in the NTSC-J version!

This is probably the work of Junko Iriguchi, an event planner.

Screens of Dollet, after the mission, before getting to East Academy Station. Not disc 4

The bumbler is this room's equivalent of the man in red in the lobby.

Cruel or not, this is definitely animal testing

Laguna's back, and in second flashback form

Around Timber in 80 screens. Like many other places, not disc 4

Your guide to Dollet during the mission!

More party changes than a politician... 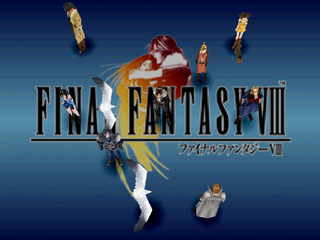 The jaunty Chocobo riding music plays upon entering. The page mostly contains portals to various incarnations of Balamb Town and the two gardens. Some NPCs have an extra menu which is accessed by trying to play cards with them. Most of the NPCs here reference fashion brands.

This was probably by Yaeko Sato, an event planner.

Has two different menus, try to play cards with him for the other one. "Tocca" and "Ozoc" are fashion brands. "Hellmoot Lang" is actually Helmut Lang, another fashion brand. All these options go to the same menu, on which the options do nothing visible. All except for the 'Sugino! Where is Sugino?' option which will cause the Galbadian Soldier to start saluting

This funky feline spouts a bunch of card game rule spreading dialog, then stuff from the Balamb Town mechanic, before finally giving you access to its menu. This does not happen on the Japanese version however, it goes straight to the menu.

Also has an extra menu you can access if you try to play cards with her.

This NPC is named 'Mikami Reiko' which is the name of the main character of Ghost Sweeper Mikami. Also has an extra menu.

Also has an extra menu!

The soldier is named Tony Redwood, which is a reference to Policenauts. As noted before, Beauty:Beast is a japanese fashion brand. Various different scenarios of Balamb Town locations during the Galbadia occupation (not disc 4)

The screen of Trabia Garden during various scenarios (discs 2 & 3)

Has an extra menu! 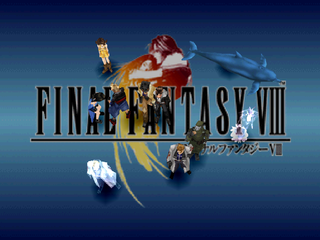 If you enter this room in the English versions, you get treated to the Ifrit Cave/Dollet mission results screen... in German! Weird.

However, if you enter this room in the Japanese version you get a much more helpful message, telling you what every NPC does.
Balamb Bound Train, From Selphie 'Train 3'"
East Academy Bound, From Seifer 'Hi'
Deling City Bound, From Seifer 'Shi'"
FH-Related, Will Begin From Zell 'FH Bound'
Town of Countless Races, From Lower Left X Seifer 'Dome Entrance'
Sea Floor Dungeon, From Dollet Soldier
Chocobo-Related, From Rinoa


This weirdness is from Hiroaki Hishinuma, an event planner.

A portal to various places in Esthar post Lunar Cry. Note if you exit Esthar and you haven't revealed it storyline-wise from where you entered the debug room, you'll be stuck in the middle of an invisible Esthar.

All about Shumi Village in Trabia.

That's the figure on the right if, like the Gamefaq's FAQ, you thought it was a 'glass crack'

Deep Sea Research Station teleports (Bahamut, Eden, Ultima Weapon sidequest). On Tower1 to Tower3, you can only go up as the terminals don't respond 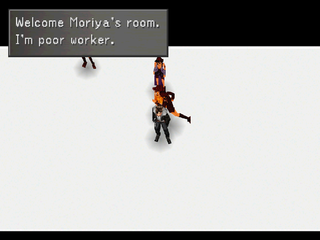 "Welcome Moriya's room. I'm poor worker." There's only two NPCs here, and a funny glitch. The background is also different from the other rooms and is quite funky-looking. The demo version of the Dollet invasion theme is playing in the background. Will crash in the NTSC-J version!

"Can you correct my English?" (An earnest request that seems to have been ignored)

Student "What are you play music?" (Correction: 'What music will you play?)

Music Sub-menu 4 - Student "Would you eat lunch with me?" (Well, if there's hot dogs at the cafeteria...)

Music Sub-menu 5 - Student "I like Japanese rice 'KOSIHIKARI'." (Koshihikari is a popular cultivar of Japonica rice)

Music Sub-menu 7 - Student "Ok,go to YOSINOYA." (Yoshinoya is a fast-food chain in Japan but with branches in the US as well)

Music Sub-menu 8 - Student "May I have two beafboals?" (again, not much English correction seems to have been done here) 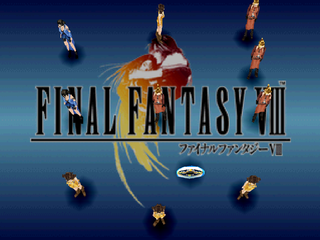 Transportation, party supplies and game event management from the most testosterone free zone in the entire game.

Lavishes gifts and tests upon your game

On the Ragnarok with the Propagators. Squall must be alone in the active party or you'll be offscreen and unable to move when selecting certain options. You can toggle which Propagators are alive or dead using 'Play With Scenario Global'->'Spaceship bit' from the above menu (Erect they're dead, Erase they're alive)

Balamb Garden during the garden riots. Discs 2 & 3 only unless stated

This room plays first FMV on the current disc

After the FMV has finished, press Square to bring up a menu containing garbled text in the English versions, because the Japanese font is gone. Translations from the JP version are used here instead:

The second room also has a menu with garbled text, translations are used here instead: