From The Cutting Room Floor
< Super Mario World (SNES)
Jump to navigation Jump to search
This page contains changes which are not marked for translation.
Other languages:
English • ‎français • ‎polski • ‎português do Brasil • ‎русский • ‎日本語 • ‎한국어

This is a sub-page of Super Mario World (SNES).

Three unused level intros exist, all with a "No Yoshis" sign that appears nowhere else in the game. These can be triggered when the GFX header of a level is equal to 2, 6, or 8. 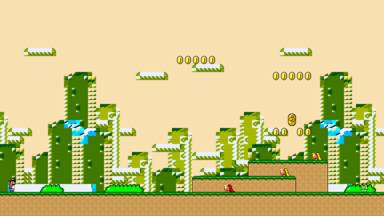 These two levels are duplicates of Donut Plains 1, referencing the same level data, the latter of the two having a glitched background and the name "#2 MORTON'S PLAINS" (an erroneous combination of the strings "#2 MORTON'S" and "PLAINS", suggesting the string table was changed). The level names are blank in the Japanese version.

The background tilemap in level 017 is the same one seen in the intro story level (0C5) and several other levels, but with the wrong graphics and palette applied. 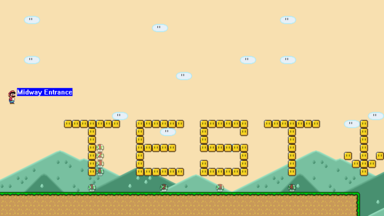 A placeholder level, consisting of the word "TEST" and a down arrow made of turn blocks, that nearly all of the unused level slots point to. The first one is at 012, but there are far too many to list.

The level seems to have been last used to test the secret 1-Up points (the numbered mushrooms in the image): touching points 1-4 in order will cause the fourth one to spawn a 1-Up. 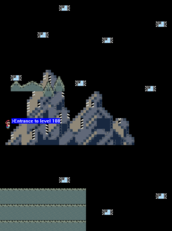 A vertical level containing eight slope objects and some ground objects. The slopes here are specially designed to work with the odd memory map used in vertical levels, and their placement across a sub-screen boundary implies that the level was used to test this functionality. 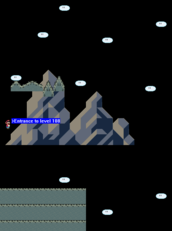 Changing the tileset to "Underground 3" (normally unused) via Lunar Magic fixes the mountains in the background.

Ride Among the Clouds

The first level in the ROM aside from the TEST level, suggesting that this was one of the earliest levels created. It bears a vague resemblance to World 1-4 of Super Mario Bros. 3.

This level is notable for being the only instance of the floating green/orange platform in the entire game. Furthermore, prior to discovering this level's sprite data, it was believed that the flying platforms from Forest Secret Area were the only platforms capable of activating the Fast BG Scroll sprite.

The pipe at the end of the stage leads nowhere. It has no screen exit assigned and isn't even set to be enterable.

This level's sprites indicate that the mushroom scale platform was once programmed very differently, and did not automatically spawn a second platform at a fixed distance from the first.

A room with doors to each boss for testing purposes, leading to (from left to right) Bowser, Morton, Roy, Ludwig, Iggy, Larry, Reznor, Lemmy, and Wendy. The ordering may suggest that this was the order the bosses were programmed into the game or (barring Bowser) an early boss arrangement.

The two blocks at the start of the level contain a Cape Feather (left) and Fire Flower (right).

A complete (aside from lacking a goal sublevel) layer 2 level. Note that this level uses the generic lava object 1A, whereas the final game always uses tileset-specific object 3A for underground levels, due to the sloped lava tiles overwriting the generic lava tiles. 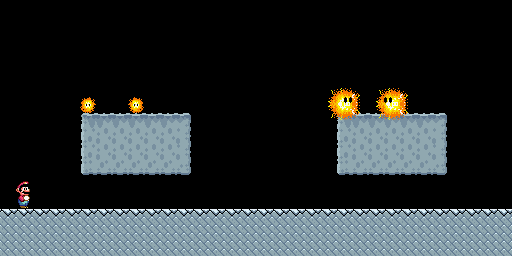 Two stone blocks with two Hotheads and two Sparkies moving around them. Probably meant to test enemies that follow walls.

Early Level (top): The only early version of a level found in the final game, 01A Wendy's Castle. This level is almost identical to the finished one, but harder. Also, there's no door at the end for some reason.

A pipe and ground, the latter spanning 8 screens. Interestingly, it uses the ground normally reserved for Ghost House exits. 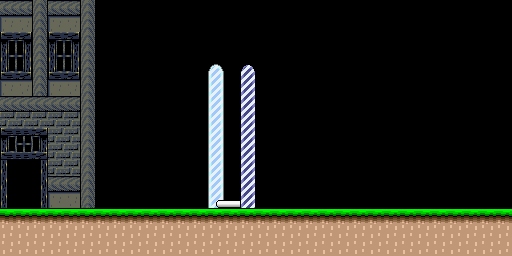 Like the other Ghost House exit levels, this one is probably supposed to use an empty layer 2 level as its background. The specified sprite data simply contains a goal bar and may actually belong to the next Ghost House exit or some other level. 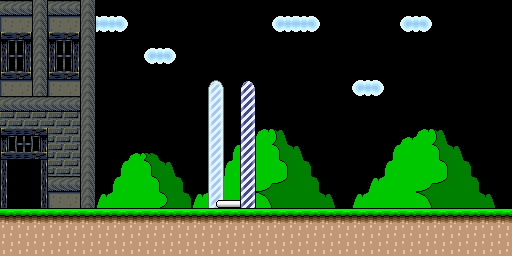 Same as above, except this one has clouds on layer 1 and three bushes on layer 2.

Some orphaned pieces of sprite data. Both contain a single exit goal bar at coordinates (30,23), with the first being a normal exit and the second being a secret exit. The only known layer 1 data that matches this position is that of level 132, a Star World level, and levels 1F0 and 1F1, both underground exit sublevels.