The self-explanatory title that defined punching and kicking (and fireball throwing) in video games.

There are a few leftover developer tools that can be accessed via dipswitch settings. 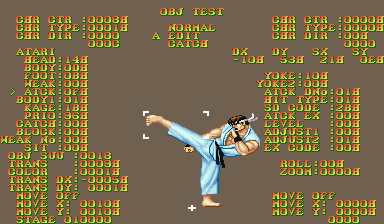 Allows you to view all character animations, along with associated data.

There are 4 modes in the Object Test, NORMAL, EDIT, CATCH, and an unlabeled mode we'll refer to as "CATCH2".

These are the currently understood parameter displays: 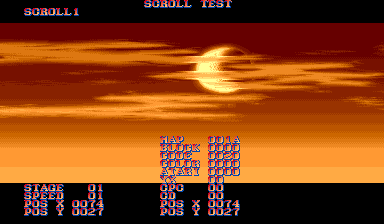 Allows you to view backdrop elements. 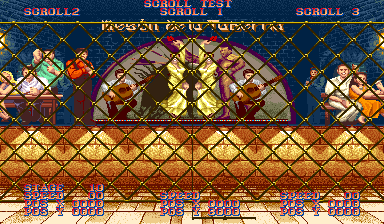 Stages 01-0C correspond to the stages of all 12 characters, 0D-0F correspond to the three bonus stages, 11 is for the title screen and the high score list, 12 is for character select and VS screens, and 13 and 14 are for the characters' endings. Stage 10, however, is unused: it is a smaller version of Vega's (Claw) stage, having the same size as the bonus stages, and is located after the "flaming barrel" bonus stage. It's possible that a fourth bonus stage was planned at one point. 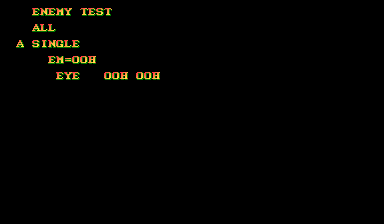 The functionality of this test is currently unknown. There are "Single" and "All" modes, both of which trigger some text and numbers that advance extremely quickly.

Leftover in the RAM is an unused ending from location test builds, featuring the icons of the four boss characters and a few (Engrish-laden) paragraphs. It can be accessed at 0xff8307. 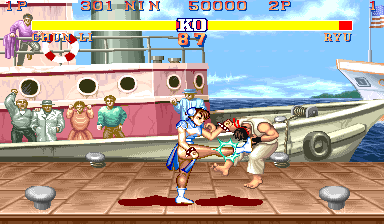 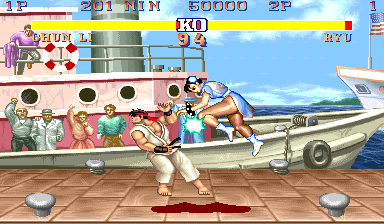 Despite having only officially been usable since Champion Edition, Chun-Li's back-flipping and forward-flipping command normals exist dummied out in The World Warrior. According to developer interviews, they were present at the location test but were removed from the finished product due to balance concerns.

The defeated portrait of M. Bison/Vega goes unseen only in The World Warrior to the four bosses not being playable until Champion Edition, which features some redrawn and tweaked character select artwork (note the glitchy hat). This artwork can only be seen in-game by using cheats to play as him.

This is actually what The World Warrior subtitle looks like inside the ROM, with a typo on "Warrior". Game planner Akira "Nin" Nishitani said in a 1991 interview that this mistake was noticed at the end of development.

The graphic trick used in-game is different than what was mentioned in the interview: the right half of the "Wo" tile in "World" was used to replace the "ie" in "Warrier". This made it appear to say "The World Warrlor" (with an L). Then individual dark blue pixel sprites were placed near the top of the 'l' to change it into an 'i'. The single-pixel sprites came from Guile's graphics.

Oddly enough, the graphics were corrected in Champion Edition, even though the subtitle went unused from that point on.

The startup animations of Ryu's and Ken's Hurricane Kicks have 4 frames, but the spinning animation starts before the last one is displayed. Ken's would eventually be seen in Super Street Fighter II (albeit for only 1/60th of a second), but Ryu's never saw any use.

The effect sprite for projectile impacts has 4 frames of animation, but it disappears after the third frame, leaving this last one unused. The animation was later updated in Super Street Fighter II but this frame still remained unused. 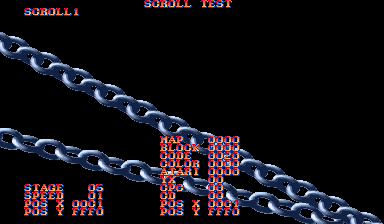 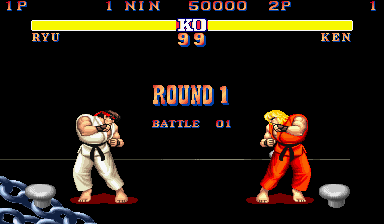 Some large foreground chains for Ken's stage. Interestingly, the original sketch for Ken's stage seen in a Street Fighter II artbook included them. They're actually present in-game, albeit layered behind all the other backdrops. 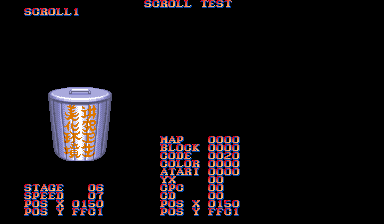 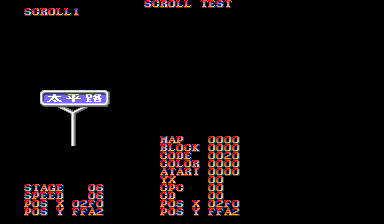 A trash can for Chun-Li's stage that reads 讲究卫生 美化环境 (Pay attention to sanitation, Beautify the environment) and an unused sign that reads 太平路 (Taiping Road). As with the chains in Ken's stage, these are present in the game, only layered behind the other backdrops.

Above is a screenshot showing how these two items would probably look if they were layered properly and not hidden. 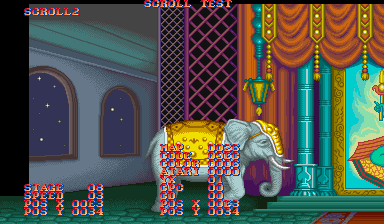 These windows in Dhalsim's stage are obscured by elephants in normal gameplay. 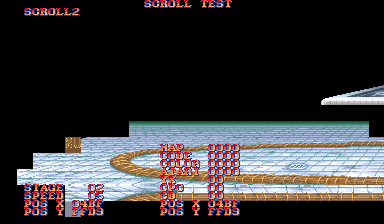 A hidden glitch tile on E. Honda's stage graphics layer, it's the "US" tile from the "WINNERS DON'T USE DRUGS" banner, mirrored.

This padding tile is repeated several times in the 16x16 graphic banks that contain data for some of the endings and the Continue screen animations. The black color is transparent in the original data.

What is presumably a KO sound intended for Vega/Balrog (Claw) exists in the PCM data, but cannot be accessed from the sound test. The characters later had varied KO sounds in Super Street Fighter II.

Perhaps one of the most notable regional differences in video gaming is this game's name change of boss characters. Sagat, who already debuted in the previous game, is the only boss character not to have been renamed.

Note: Pictures are from Champion Edition, where the bosses can be selected by the players for the first time.

The disgraced African-American boxer is known as M. Bison (M for Mike) in Japan and Balrog elsewhere. This was changed due to concerns about a lawsuit from real-life boxer Mike Tyson, upon whom the character is based.

The Spanish claw-wielding, mask-wearing bullfighter is known as Balrog in Japan and Vega (which is actually a Spanish surname) elsewhere.

Finally, the leader of Shadaloo and soon-to-be-world-dictator is known as Vega in Japan and M. Bison elsewhere, this was because Capcom USA thought Vega was a weak name for this character. What the "M" actually stands for has remained inconsistent across the series - the animated Street Fighter II film and Alpha 3 use it to refer to "Master" (Vega-sama, in Japan), whereas Street Fighter IV and Street Fighter X Tekken use "Mighty".

Whilst the international title screen for Hyper Fighting went for a blue background similar to Champion Edition with a recolored Street Fighter II′ logo and the game's subtitle spelled in flashing letters, the Japanese title screen features a slightly more elaborate design consisting of a black background and a large blue stripe behind the logo, with the word "Turbo" added to the main title and no flashing subtitle. Like Champion Edition before it, the full Japanese title is Street Fighter II Dash Turbo: Hyper Fighting, with "Dash" being represented with a prime symbol. The word "Turbo" actually appears on the game's U.S. marquee despite its absence on the international title screen, which is simply the Street Fighter II Champion Edition marquee logo surrounded by the words "Turbo" and "Hyper Fighting".

The rest of the game is inconsistent as to which title it uses in all regions. The revision screen during boot-up displays the title as Street Fighter 2′T, while the staff roll uses Street Fighter 2′ with Hyper Fighting written underneath.

The "Turbo" suffix would later be used for the Super NES equivalent in all regions (without the prime mark).

The portraits for all 12 fighters were revised in Champion Edition, with Ken's being the only one that was almost unchanged from The World Warrior. Most of the retouches mainly revolve around the characters' actual faces, but some of the palettes (most notably Chun-Li's and Dictator's) were fixed too.

Several victory poses were redrawn to be more on-model.

The visuals for some of the endings were changed too.

Ryu was given a more in-character facelift for the later revisions.

Ken and Eliza's heads were redrawn to be less terrifying. Ken was also given broader shoulders and Eliza was given a less detailed dress.