Marvel Super Heroes vs. Street Fighter is the second entry in the popular Marvel vs. Capcom series... somewhat, it's really just an altered X-Men vs. Street Fighter. It's notable for having a roboticized version of Akuma and a region-exclusive character not seen before or since.

Set FF3853 to 26 to select Cyber-Akuma (the final boss), then complete the game with him to get this screen that's possibly a leftover from a location test. It shows the Ryu artwork seen in the attract mode's intro and Wolverine's ending music plays here. In the Hispanic region ROM, the English text is untranslated. The Japanese version translates to "Currently in production!!!"

What appears to be an unused attack for Japan-only character Norimaro. It depicts him fantasizing about a particular Capcom character, then an explosive nosebleed occurs right after. Several variants of the animation exist, involving different characters as Norimaro's object of desire: Chun-Li, Sakura, Cammy, Morrigan, Felicia, Anita, and Zangief.

Interestingly, the erupting blood actually has a hitbox and is capable of hitting the opponent, indicating this attack was dummied out late in development.

This animation is stored with the graphics for Norimaro's win poses. It shows him looking at something with a lecherous expression on his face, then getting down onto the ground for a closer look. Norimaro's win pose against the male characters has him walking over to the defeated opponent, pulling out a camera, and photographing himself over them, so presumably, this animation was intended for when he had defeated Chun-Li and Sakura, just as he has an alternate fight intro animation for them, and instead of taking a photo, he would go to look up their skirt. In the final game, he instead does his 1st Character Select taunt every time he defeats the female characters.

One of Norimaro's transformations during his "Ultra Variety Private Memories" Hyper Combo shows him in a bathtub, he is normally only seen from his chest upward but there exist tiles for the lower parts of his body and they show him sitting on a stool, which is how it originally was seen in the video of a prototype played during Noritaro Kinashi's visit to Capcom.

A sprite of Karin Kanzuki, the character that debuted as Sakura's rival in the 1996 comic Sakura Ganbaru! and would later become playable in Street Fighter Alpha 3. Here she appears as a head-swap of Sakura, and since only this idle animation can be found for her in the ROM, she may have been meant for a cutscene.

(Source: Rage Quitter for the info, and Ragey for the GIF)

Dhalsim's wife from Street Fighter Alpha 2, either a leftover, or maybe she was meant to appear in the background during his fights. 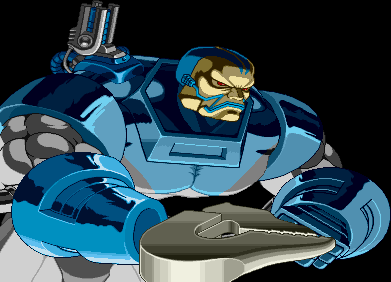 Apocalypse has an unused attack, which apparently wasn't finished: one of his hands turns into a pincer which slowly moves towards the opponent and can push them back, dealing no damage and having no effect on them. His unused attack from X-Men vs. Street Fighter is still in the game as well.

Both the Secret File flier from the time of the game's release and the Marvel vs. Capcom Official Complete Works book mention plans for a Hyper Combo in which Blackheart summons Mephisto, who proceeds to grab the opponent and then breathe fire on them. The sprites and animation data still exist in the finished game. The colors seen here are likely incorrect; proper palettes have yet to be found. 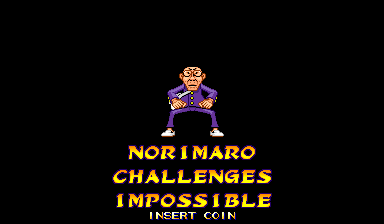 In the Japanese version, the attract mode shows an additional sequence in-between the game's intro and the gameplay demos that showcase Norimaro and has its own short tune.

Additional credits pertaining to Norimaro, including to NTV and Arrival (the television station and the talent agency that Noritake Kinashi is associated with, respectively) are shown during the attract fights in the Japanese version. These were omitted in the international versions just as the character also was (see below).

The X-Men vs. Street Fighter-debuted feature where both characters perform a Hyper Combo at the same time was given a name in this game, which is different between regions: Variable Combinations in the Japanese version and Cross-Over Combinations in international versions.

Norimaro is a "joke" character based on comedian Noritake "Noritaro" Kinashi, he is only selectable in the Japanese sets (with some exceptions). In all other versions, his space is replaced with the game's logo. He can be selected on international versions by setting 0xCD to 01 or by using the following MAME cheat:

Due to him being locked in the international sets, Norimaro's theme goes unused.

His two ending themes as well.

Despite being unavaible in non-Japanese versions, the text that appears after his "Ultra Variety Private Memories" Hyper Combo was translated. 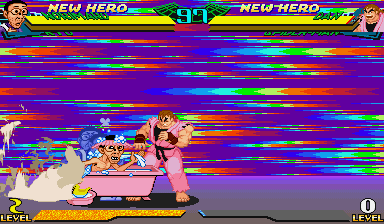 Further, using said Hyper Combo only does 19 hits instead of 21 like in the Japanese version. This is because the animation frames for two of the hits, that show Norimaro in a bathtub, are skipped and the sprite goes unused.

The speech bubble of his taunt where he asks for an autograph from his opponent was appropriately translated.

...and his win quotes. This and his Apocalypse pre-fight quotes were translated to Spanish and Portuguese as well. The "I WARNED YOU!" and "AUTOGRAPH PLEASE!" graphics are English/Japanese only.

The screen (which is in English on all regions) that pops up upon beating the game with the secret selectable characters (except the Capcom ones on the Japanese version, as seen below) uses a different font between versions, with the international versions using one text box less.

Bizarrely, beating the game as Norimaro in the international versions shows his ending images with Dan's ending dialogue (only the first line) and Captain America's nametag.

If Norimaro is the main character:

If Norimaro is the partner character:

(Source: Rage Quitter 87 for the image, and his friend Ragey for translation)

The Capcom side of secret palette swaps characters (Dark-Sakura, Mech-Zangief, and Shadow) have proper endings made for them in the Japanese version, but on international versions, the game instead shows the same screen that plays if the game is beaten with the secret Marvel ones (seen above). They later wouldn't do this with Marvel vs. Capcom, but it seems like they couldn't be bothered in this one.

If Dark Sakura is the main character:

If Dark Sakura is the partner character:

If Mech-Zangief is the main character:

If Mech-Zangief is the partner character:

If Shadow is the main character:

If Shadow is the partner character: 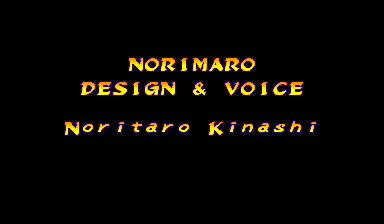 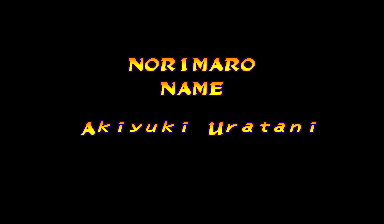 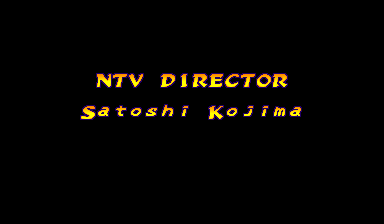 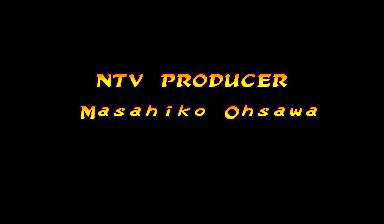 The Japanese version's staff roll credits the people related to Norimaro's creation, they're all omitted in international versions. Noritaro Kinashi is listed as the designer and voice actor for Norimaro, and Akiyuki Uratani is credited for naming the character (as it was chosen in a contest). Satoshi Kojima and Masahiko Ohsawa (NTV director and producer, respectively) are also mentioned, plus Arrival and NTV appear during the "Special Thanks" segment at the end.

In revisions 970702 and 970707 of the Japanese version, any credit setting except "1 Coin = 1 Credit" or "Free Play" denies the ability to select Norimaro just like in any non-Japanese sets. This behavior is not present in revision 970625. 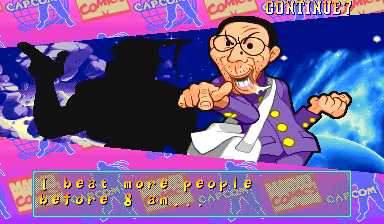 If Shadow delivers the last blow on a match, in the win quote screen his win quotes will appear aligned to the left instead to the center, exactly as Shadow's original form (Charlie) did in the previous game, X-Men vs. Street Fighter. In fact, all of his win quotes are exactly the same as he had in that game. This issue also occurs when the game is set to Spanish or Portuguese, but not in Japanese.