The true follow-up to the first EX, which debuted original Arika characters Hayate and Sharon, as well as Blanka and Vega (the claw wielder) from the Capcom games. Allen and Blair, however, leave the series for spots in another Arika fighting game (this one released under Namco), Fighting Layer.

In the Japanese version, after beating the last boss, Garuda, the player gets a screen with a drawing of their character and an ending epilogue to the right. Each character has one, and a few even have alternate text if Kairi or Shadowgeist were fought as secret bosses. However, in the non-Japanese versions, the text was removed and instead you get a generic message that says: "Thank you very much for your playing!! See you at our next game!!".

Translations for those endings can be found here.

Some characters such as Vega, Garuda and Hayate have attacks that cause the opponent to bleed. If "Regulation" is set to "On" in non-Japanese versions, the blood squirts will be recolored green, though this can be reverted by setting it to "Off".

Also, as is common practice in the series, Vega (the claw wielder) is known as Balrog in Japan. 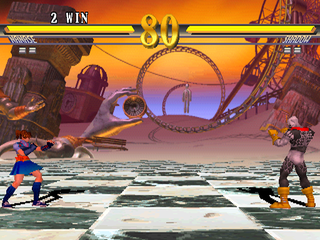 Shadowgeist has a stage (called Amusementive Crime 2), featuring a checkerboard pattern and surreal stuff (mainly things that belong in amusement parks) buried in sand. Possibly due to the inclusion of a human-like figure hanging from a roller coaster track, the stage was removed outside mainland Japan. In non-Japanese versions, Shadowgeist is instead fought in the Lost Sea stage. The music for the removed stage is still present in the sound test, though (sound code no. 0014).